Who do you love?

Flipping through Attaché, the US Airways in-flight magazine, I saw that one of their music channels is called “Blues Festival.” You can tell that the US Airways folks are real down-home from this photo and caption included with the playlist. (Sorry about the poor photo—low light, bumpy ride, and too embarassed to draw attention to myself by using a flash.) 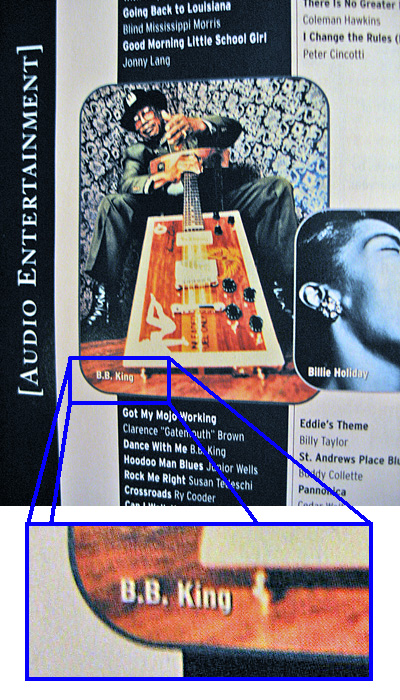 As we all know, B.B. is famous for his rectangular guitar, giant glasses, cowboy hat, and of course, that “B.B. King beat.”

Addendum: I wrote the snotty stuff above while on a flight yesterday. When I got home that evening I read this cliché-ridden article in the Tribune. The Trib is doing this “Seven Wonders of Chicago” series, and Chicago Blues is one of the nominees. Why they assigned this article to Howard Reich, who spends most of his time mooning after cabaret singers, I’ll never know. Here’s the opening paragraph:

It’s rough and gritty, raucous and raw and, at its best, a searing expression of life in this city. Part myth, part reality, the Chicago Blues are everywhere in this town - if you know how to listen. For though it’s true that the heyday of the city’s most celebrated blues clubs is long past - the demise of shrines such as the Checkerboard Lounge, Gerri’s Palm Tavern, Theresa’s Lounge and scores more attest to that - the music still sings out fiercely.

Somehow Reich forgets to mention that Chicago is a blue-collar town—he may get fined for that—but maybe he just couldn’t come up with a clever blues/blue collar metaphor on deadline. So I guess Attaché shouldn’t be too embarassed by their mixup of Bo Diddley and B.B. King when the premier paper in the capital city of the blues pumps out this sort of bilge.