A quick little TextMate command/macro pair for handling Markdown headings using the setext format. That’s the one where you use “underlining” to distinguish headings from other text. Like this

for an <h1> heading and this

TextMate ships with commands that do the underlining. After you’ve typed in the heading text, you move to the next line, type a single “=” or “-,” and hit the Tab key. The single “=” or “-” will expand into series that matches the length of the text above it. Simple, elegant, useful. But I wanted more.

Start with this command for <h1> headings.

It takes one or two lines of text as input and prints one, two, or three lines of output. The possibilities are: 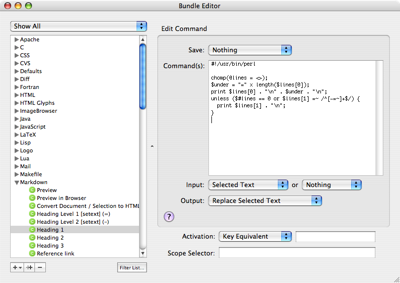 As you can see, I named the command “Heading 1,” but you can call it anything you like. (Click on the screenshot to see it full-sized.)

Now for the macro that prepares the input and runs the command. The idea is to be able to call the macro with the caret anywhere on the line with the heading text, so open a new file and type in a short line of text. Make sure the caret is somewhere in that line. Then

You can now test out the macro under different conditions by choosing Replay Scratch Macro from the Automation menu. If everything works well, choose Save Scratch Macro… from the Automation menu and put it in the Markdown section. Give it a name—I chose “Heading 1” again—a Key Equivalent—I chose Control-=—and set the Scope to “text.html.markdown.” When you’re done, the Bundle Editor window should look like this. 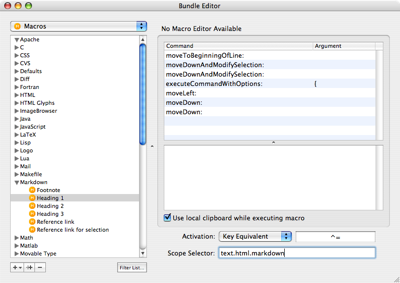 Update
In the comments, Clayton Hynfield suggested a change to make the caret always end up below the underline and I’ve incorporated that change in the macro definition. Thanks, Clayton!