I’ve written two posts this summer about a set of Shure e2c earphones I bought for my iPod mini. In the last post, I showed how I had “shortened” the cord with cable ties. This turned out to be a little too inflexible—sometimes I want the cord longer, sometimes shorter. So I cut off the cable ties and replaced them with a pair of Velcro wraps. 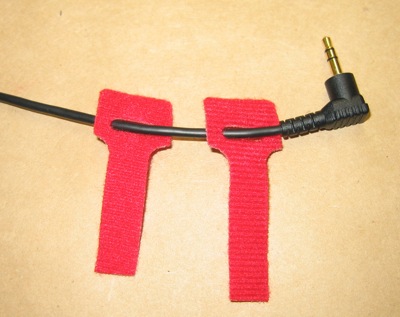 I bought the wraps a while ago at Home Depot. Out of the box, they’re quite a bit longer than I needed for this job, so I cut them to size you see above. The slotted hole in the end was just big enough to get around the Shure’s plug.

When I need the cord shortened, I wrap it back on itself and an use the Velcro at either end of the wrap. 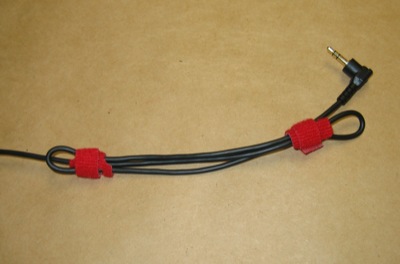 The straps also come in handy when I wrap up the cord up for storage. 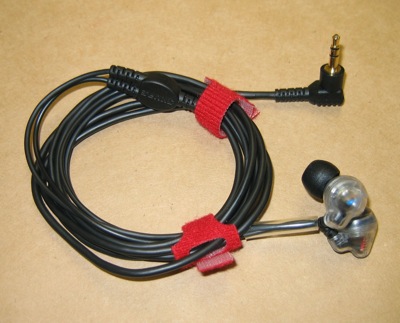 The speakers were on sale at Buy.com and I bit. They sound pretty good for their size. I haven’t had a chance to take them on the road and check their battery life, but I have a few trips coming up in the next month that’ll be good tests.

The armband arrived today; its purchase was, in some respects, my way of admitting that my Velcro straps weren’t a complete solution to the problem of managing the earphone cord while riding my bike. No matter what length I set it at, there were times during the ride when I wished it were longer or shorter. Basically, there is no good way to ride a bike with your iPod clipped in your shorts’ pocket. I’m glad I capitulated—the ride home from work today with the iPod strapped to my arm was the most pleasant ride I’ve had. No worries about the cord catching on the saddle when I’m stopped at a light, no cord sliding on my thigh as I peddle. Wish I had bought the armband at the beginning of riding season.

One problem though: the clip on the Speck armband is sized to hold a mini encased in the Speck skin. A skin came with the armband, so it’s not like Speck is forcing you to buy another of their products, but the skin is quite tight and is not something you want to be putting on and taking off regularly. And it’s a bit too thick to fit in the the inMotion’s stand. So I sliced off the bottom of the skin and shaved its back with an Xacto knife. Now it fits, albeit imperfectly.

You can see the results of my surgery on the bottom here: 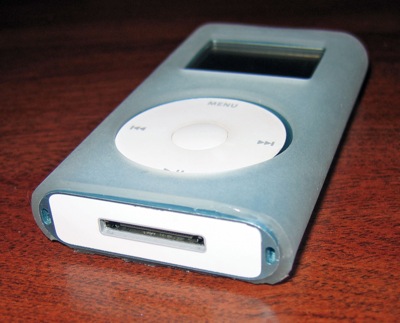 It used to have a thick cover sort of like the top, but with different cutouts. 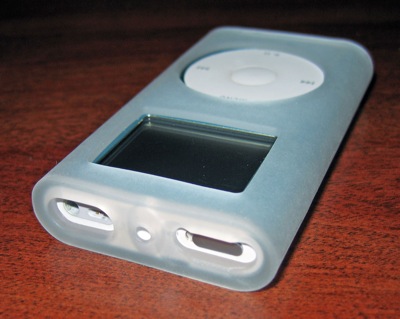 You can’t see the problem from the front 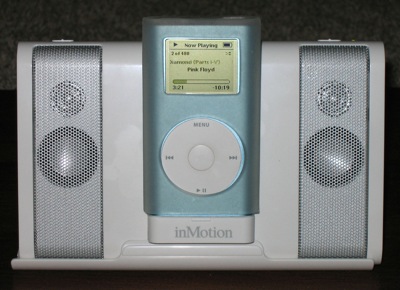 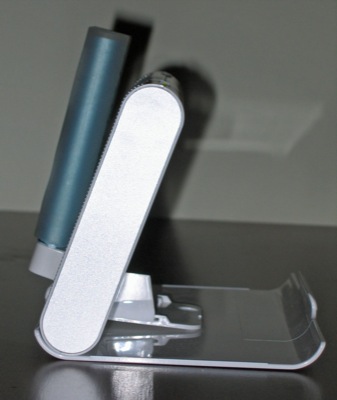 I may need to do a little more shaving on the back.

One more thing: the Shure cord, being thicker than the Apple cord, doesn’t fit in the little “cord management clip” on the armband. Fortunately, my Velcro straps keep the cord in place after I’ve wrapped it around the mini a few times.