As the news and the blogs have spent the past week or so teaching us about the House page system, the age of consent laws in Florida and D.C., and the leadership skills of Denny Hastert (he was probably too busy working on his urban renewal plans for New Orleans to pay attention to the Foley warnings), they seem to have missed a bit of news: over 20 US servicemen died this week in Iraq. Twenty-three, actually, according to the Iraq Coalition Casualty Count. And the week isn’t over.

This bad news follows the high number of deaths last month, the second-worst month of the year so far. Are things improving in Iraq? You tell me after looking at this: 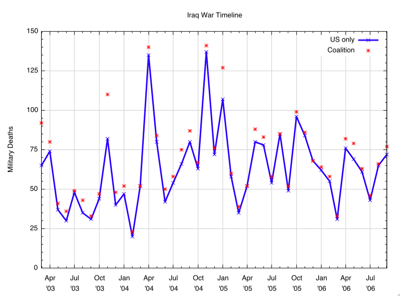 You can click on the graph to see it at full size. It stops at September because that’s the last full month. The data come from the Iraq Coalition Casualty Count, a site I go to whenever I feel the news is ignoring the war.

I’m not suggesting that numbers tell the story of the war. The most recent spike in casualties, for example, is apparently due to new US tactics—more patrols, more aggressive behavior by coalition forces to slow down the slaughter of Iraqis. But the numbers are real, and they tell a story of the war. A war that keeps chugging along, killing our men and women as we concentrate on other things.