I’ll get to the post describing the LGTD scripts—promised at the end of the last post—sometime this weekend. In the meantime, this entry at 43 Folders suggested to me a deficiency in LGTD as it is currently composed: there is no list of projects alone. The “projects.gtd” file does, in fact, contain a list of the projects, but they’re all jumbled up with their associated next actions.

It’s easy enough to get a pure project list from “projects.gtd,” though: just filter the file through grep to select the projects. You can do it like this: 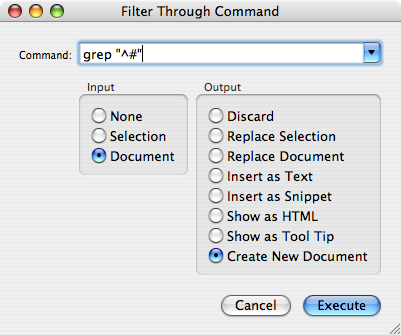 and the list of projects, complete with hash marks surrounded each project name, will pop up in a new window. If you don’t like the hash marks, a run through sed will get rid of them: 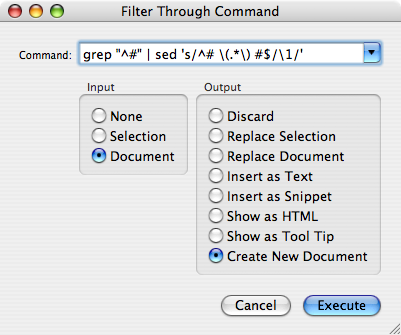 It would be really nice to use TextMate’s folding to roll up all the “Next action” and “Waiting for” bits to show only the project names. Unfortunately, the regular expressions that define a foldingStartMarker and foldingStopMarker in a TM language rule seem to be restricted to single lines. You can’t say, for example, that folding should stop with a blank line that’s followed by a line that starts with a hash mark. As this is exactly the sort of definition I need to fold up the project stanzas in “projects.gtd”, folding can’t work. You’ll notice that the Markdown grammar doesn’t fold on headings, either, and for the same reason.

(If I required some non-blank, content-free line—a row of hyphens, for example—to end each project stanza, then the folding definitions would be easy. I tried this, but don’t like the clutter it creates.)

I should mention that it’s not my intent for all projects to go into the “projects.gtd” file, only the projects you’re actively working on. Nobody want their “someday/maybe” projects jumbled up with their day-to-day work. I suggest a “someday.gtd” file where these future projects can rest and mature until you’re ready to copy them into “projects.gtd” and work on them.