By reusing some of the code discussed in this post, I put together this AppleScript/bash script combination that searches the Address Book for a particular contact and opens that entry.

The AppleScript is called abid.scpt. It’s stored in my ~/bin folder looks like this:

It uses the same searchName function discussed in the earlier post and, when run from the shell, returns the id for the contact. The id is a long string of hex characters followed by “:ABPerson.” Here’s the id for Apple in my Address Book:

What good is this? Well, it turns out this is most of the Uniform Resource Identifier (URI) for that entry, and if I issue this call from the Terminal

Address Book will open to the Apple Computer entry (my Address Book doesn’t reflect the recent name change to Apple, Inc.). With this knowledge, I made the following short shell script, called abopen:

This script is also saved in ~/bin and is executable.

You’re probably wondering about the value of such a script. Wouldn’t it be easier—or, at least, no more difficult—to type “apple” in Address Book’s search field than issue an abopen apple command from within the Terminal? Yes, of course, but that’s not how I use abopen. Instead, I’ve used it to make a Contextual Menu item that allows me to select a name in any program—on a web page, in the body of an email message, in the text of a letter or report—then right-click (or Control-click) on that selection and choose “Open in Address Book” from the Contextual Menu. Address Book then opens to the entry with that name.

I used the very nifty On My Command and its companion program, OMCEdit to make the Contextual Menu item, and the process could not possibly have been easier. Here’s a screenshot of OMCEdit with everything needed to make the CM item. 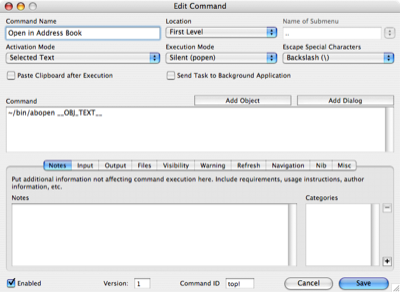 The only things I had to do were:

Everything else stayed at their default settings. I had never used On My Command before, but it only took me a minute or two to make this really useful CM item.

Now when I get an email telling me to set up a meeting with Sam Johnson, I just swipe through his name, select “Open in Address Book” from the CM, and Address Book pops forward with Sam’s contact info. It’s not as though this saves me a great deal of time over my old method—swipe, copy, bring up Address Book, click in search field, paste, return—but it feels so much better. It feels like the computer is working for me instead of me working for it.

What I really like about On My Command is how it leverages the old Unix tools idea and makes it almost effortless to put those tool in a GUI context. (That’s what I like about TextMate, too.) I expect to be playing with On My Command a lot in the next few weeks.