As I touched on in the last post, the happiness I feel to see a significantly lower death count for September is tempered by the knowledge that 66 US troop deaths is about the monthly average for 2005 and the first half of 2006. 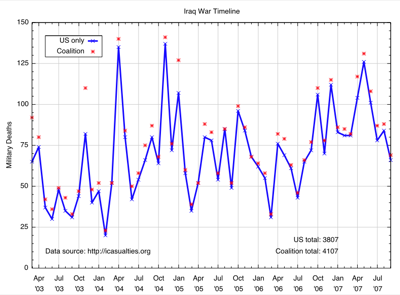 I have no doubt that right-wing pundits will seize upon this number and claim that it proves the surge is working, Iraq is on the right track, the Bush administration’s strategy is right, Petraeus is the man, et cetera, et cetera. And they may be right. After 4+ years of getting everything wrong, they’re due to get something right. Aren’t they?