I’ve been carrying a Fisher Space Pen (the bullet model) since early summer, and I’ve been pretty happy with it. Generally, I prefer a click pen so I can “arm” it with one hand while juggling phone, paper, etc. with the other, but the Fisher is easy to hold, takes up very little pocket space, and makes a pretty good line at whatever angle I hold it.

A few weeks ago, though, it stopped making a good line. As it sat in my pocket, unused for hours at a time, the ink would build up around the ball. When I did take it out to write, it would leave a smeary blob of ink at the point where the tip first hit the paper. Since I don’t carry a blotter around with me, this would ruin whatever note I was writing and often leave me with ink stains on my fingers.

My solution was to build a blotter into the pen. I take a small piece of paper towel, ball it up, and drop it into cap half of the pen. The tip of the pen jams it into the tapered end of the cap so it doesn’t fall out, and the contact between the paper and the tip keeps the tip ink-blob free. I haven’t ruined a note since I started doing this. 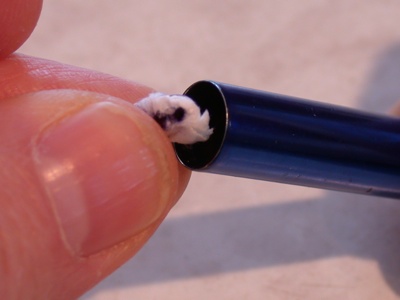 At first, I was worried that the paper towel would wick the ink out of the pen, but that hasn’t been the case. The current wad of paper (brought out of the cap to pose for the picture above) has been in the cap for about two weeks, and it’s still mostly white.

How big should the wad of paper towel be? You’ll have to experiment, but the tip goes almost to the very end of the cap, so if the wad isn’t quite small the pen won’t close all the way.

A very simple fix to what was becoming a very annoying problem.

One last thing: I’ve found that the easiest way to retrieve the wad of paper from the cap is to stick a long wood screw down into the cap and give it a twirl. The screw threads dig in so the paper comes out as you withdraw the screw. You can try banging the cap on a hard surface, but that doesn’t always work.