PandoraBoy, the standalone Pandora player, recently updated to version 0.5.0. After the update my pandora-playing AppleScript—the script that GeekTool uses to display the song info for the currently playing track—broke. When I opened “pandora-playing” in the Script Editor, this is what I saw: 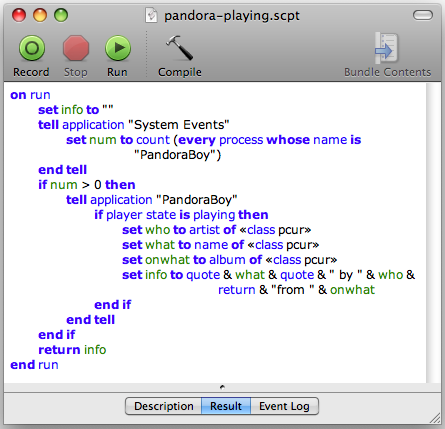 Every instance of the phrase current track had been turned into «class pcur». This happened on both my Leopard-running G4 iBook and my Tiger-running Intel iMac. My other PandoraBoy AppleScript, MultiPlayPause, worked with no changes after the update.

It was easy enough to change all the «class pcur»s back into current tracks, but kind of weird to see a script change on its own like that. I wonder if it would have changed if I had saved it as a text file instead of a compiled script? I bet it wouldn’t have.