Airplane on a conveyor

I wasn’t able to watch the end of last night’s Mythbusters, but I take it that they got the airplane to take off from an opposite-moving conveyor belt. Not surprising. Also not surprising is that people are still arguing about it. Part of the arguing seems to be based on different interpretations of the problem. Let’s walk through the problem step by step and look at the consequences of the different interpretations.

I’ll start by saying that I have a Ph.D. in engineering and that I used to teach mechanical engineering at a major US university. Further, I taught statics and dynamics courses, the very courses that deal with the issues at hand. This will, of course, mean nothing to the great self-appointed experts of the internet, but I think it’s worth a mention. Onward.

At this point there’s a fork in the way people interpret the problem. You can assume:

Or you can assume:

I suspect that a lot of people think you can have it both ways: an engine speed equal to that of normal takeoff and a body speed of v0 relative to the conveyor. That, in fact, is the trick of the problem. But you can’t have it both ways.

Here’s a side view of an old biplane that I lifted from this site. I’ve added the arrows that represent the forces that act on the plane as it’s trying to take off. This sort of drawing is called a free body diagram and is one of the fundamental tools for solving mechanics problems. 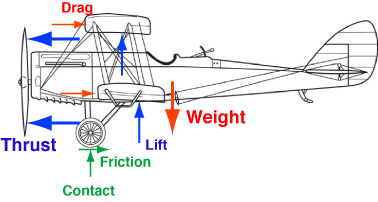 If we assume the first scenario, with the engine speed equal to that of a normal takeoff, the thrust will be much higher than the sum of the drag and friction forces, and the plane will accelerate to the left. (The friction force won’t increase much as the speed increases and won’t be significantly different from the friction in a normal takeoff.) Eventually, the plane will reach a speed relative to the ground and air where the lift forces at the wings will be greater than the weight. At this point, the contact force will drop to zero and the plane will take off.

If we assume the second scenario, with the body speed of the plane relative to the ground and the air of zero, the drag force will be zero (because the wings won’t be moving relative to the air). Since the plane is stationary relative to the ground, its horizontal acceleration is zero and its horizontal forces must be balanced. Therefore, the engine will only have to provide enough thrust to balance the relatively small friction at the wheels. This is much less thrust than is required for the first scenario, so the engine speed will also have to be much less than in the first scenario.

The upshot is you can’t have a stationary plane with its engine running like it would for a normal takeoff. You have to pick one or the other.

[Those of you familiar with free body diagrams may take issue with where I’ve placed some of the forces. Me too. I know the moments aren’t in balance, but I wanted to keep force arrows separated enough to be easy to distinguish. If moment equilibrium were important to the problem I’d be more careful where I drew the arrows.]