The US military death rate in Iraq dropped suddenly in the latter half of September and has stayed down. 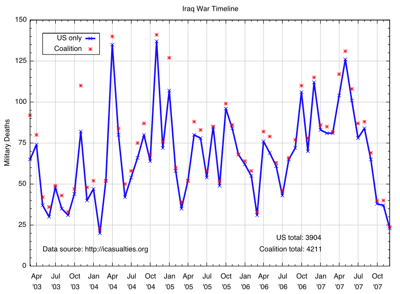 For over a month, I’ve heard and read war supporters saying that there have been “several” months of improvement. This is, at best, a stretch. The death rates in July, August, and early September were quite high compared to most of the war and were only an improvement over the terribly high rates of April through June. This compulsion of right wingers to lie, even when the news is good, is the reason I doubt everything they say.

But there’s no doubt we’ve had three full months of good news after almost twelve months of bad news. That’s something to give us hope for the year ahead.