For me the hidden gem of the upcoming iPhone 2.0 software is the new scientific calculator application. I’ve been using Belfry’s SciCalc webapp, which is nice enough, but it doesn’t seem as responsive to key taps as the builtin calculator, probably because it’s not a native application.

Here’s what the new calculator looks like according to Apple’s calculator page. 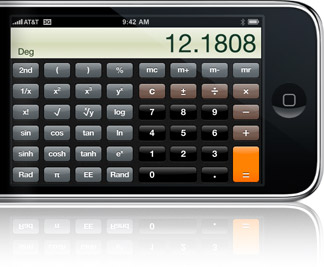 It has the functions I use often, and may be hiding some more goodness behind that 2nd key in the upper left corner. Of course, I also have some complaints, even though I haven’t used it yet.

First, I think the calculator’s switch from basic to scientific when you turn the iPhone from portrait to landscape is a cute idea that will quickly wear out its welcome. Even though my favorite real-world calculator, the spectacular HP 15C, was landscape oriented, I don’t want my calculator switching back to basic mode just because I’ve turned it a bit. And I suspect people who just want the basic mode don’t want it shifting on them, either.

Next, Apple’s choice of some functions seems weird. The x3 key is a waste of space; in thirty years of calculator use, I’ve found cubing to be no more common than raising to any other power—the xy is sufficient. And while there’s a ex key to complement the ln, there’s no 10x key to complement the log. It wouldn’t bother me if there was no log button—calculators make base 10 logs much less useful than their continued presence in math handbooks would suggest—but if you’re going to have log, you really should have 10x. And percentage keys really have no business being on a scientific calculator; if you don’t know that percents are just decimals, you should stick to a basic calculator.

Now, there are some good things about the calculator. The big = key is a nice touch. The pi key is something no scientific calculator should be without, but many keep it hidden behind a function key. And I like the idea of having a Rand key, even though I don’t know why you’d use a random number generator on a non-programmable calculator.

Speaking of which, why isn’t this a programmable calculator? Oh well, we’ll probably see a few of those in the App Store.