June continued the low casualty rate that’s been in place since the latter half of September. 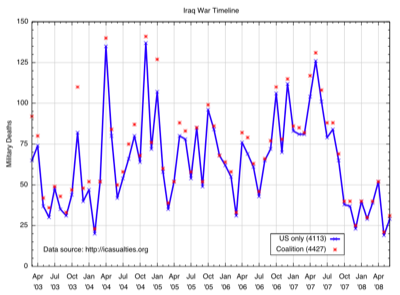 For the past eight months we’ve seen casualty rates that are about a third of what they were over the previous twelve months, but we have yet to see an explanation. “The surge” is not an explanation; its a convenient dodge for supporters of the war. The high military death rates continued for several months after the surge began.

One would think the real story of the sudden decrease in casualties—a decrease which, oddly, coincided with General Petraeus’s first appearance before Congress—would be of interest to the nation’s great newspapers. But all we get are soundbytes from the right and speculations from the left.

The answer will not change my belief that the war was both a strategic mistake and, more important, immoral, but it’s something we should all know. The Founding Fathers gave us a free press because they wanted an informed citizenry voting on the issues of the day. We’re being let down.