I’m gearing up to rewrite my photo indexing program again, and I’ve run across a problem in using TrueType fonts on the Macintosh with the Python Imaging Library. Fortunately, there’s a simply remedy.

Back in 2000 or so, I wrote a Python program that took a bunch of JPEGs and created a new set of JPEG files (index pages) with reduced-size versions of the originals laid out in a matrix and labeled with their file names. 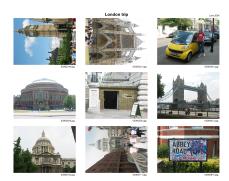 I called the program “photopage” and wrote about it here.

Over the years, I’ve rewritten the program several times. I’ve

I’ve decided to go back to Python and PIL. Overall, I liked PIL more than ImageMagick but didn’t like PIL’s need for specially-formatted bitmap fonts for every size and resolution. Now that PIL can use TrueType fonts, I’m eager to go back to it as I’ll have more freedom in laying out the image labels and captions.

PIL’s function for loading a TrueType font is in the ImageFont module:

where file is path to the .ttf file and size is the font size in points. Unfortunately, many of the system fonts on the Macintosh don’t have a .ttf file. If you look in /System/Library/Fonts/, for example, you’ll find a Helvetica.dfont, but no Helvetica.ttf. The .dfont format is a Mac-specific thing that, among other things, binds together the .ttfs for all the variants of the font.1 The TrueType information for each variant is inside Helvetica.dfont, but PIL isn’t smart enough to know how to extract it.

Fondu to the rescue

Luckily, a smart programmer named George Williams wrote a neat little command-line utility that creates .ttfs from .dfontss. It’s called “fondu”, and you can download it here. Williams provides Mac, Linux, and source versions of the program; the Mac version is a package that installs itself in /usr/local/bin/. Don’t be worried that the last update was three years ago—the program works fine on Leopard.

Because fondu creates several files, I recommend you create a new folder before running it. Then open Terminal, cd your way into that new folder in the Terminal, and run something like

using the full path to whatever font you’re interested in as the program’s argument. For the command above, I got 20 new files:

The .bdf files are text files that contain bitmap versions of the font at various sizes. BDF is a Unix standard for X Windows. The four .ttf files are what we’re after. PIL works happily with them.

I’m not sure of the best place to save the .ttfs. I’m certain I don’t want them in /System/Library/Fonts/ or anywhere the Mac normally looks for fonts, because I don’t want duplicates. I’ll probably end up saving them with the PIL library in /Library/Python/2.5/site-packages/.