It's a Wonderful Life

There’s a well-written article in today’s New York Times about It’s a Wonderful Life. The writer, Wendell Jamieson, does a good job of discussing how dark the film is, despite its Capra-corn reputation. I wonder, though, if readers under 35 will understand why anyone cares about the film. 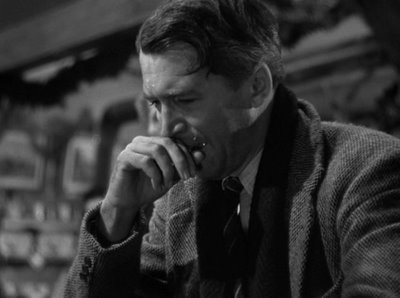 Jamieson is probably about 45, a few years younger than me, and I think that’s why It’s a Wonderful Life seems so important to him. If you’re our age or older, you will have strong memories of the film being shown incessantly on TV during the holiday season. In the late 70s, the copyright on the film was thought to have run out through a clerical error, so no royalties had to be paid for showing it. TV stations began playing repeatedly because it was cheap and could be counted on to draw a decent audience. It’s only a bit of a stretch to say that if you lived in or near a big city in the 80s, you could watch It’s a Wonderful Life on one channel or another any time of the day in the runup to Christmas. (Brief history lesson: there were no TiVos in the 80s; VCRs were just coming into their own in the middle of the decade. Watching TV back then generally meant watching what was being broadcast by a station at that moment.)

This saturation made George Bailey’s story almost as familiar as Jesus’s. Comedians referenced it in their acts, knowing that the audience would get the joke. TV shows did the same. One of my favorite takeoffs was a skit on Saturday Night Live during the S&L crisis of late 80s. Dana Carvey, as George Bailey, has been hauled up before Congress to explain where the money from the Bailey Building & Loan has gone. “The money’s not here,” Carvey says, in his warbling Jimmy Stewart voice. “It’s in Joe’s house, and Martini’s house, and Mrs. Macklin’s, and a hundred others.”

In the early 90s, clever lawyers figured out how to reassert the copyright, and overnight It’s a Wonderful Life all but disappeared from our TVs. I think it’s shown just once or twice a year now, and just doesn’t mean as much to young adults now as it did to us back then. Pity.