Three consecutive months with fewer than 20 US and coalition military deaths. 314 US deaths in 2008, the fewest in any year of the war. Good news, unless you knew one of the troops behind the numbers. 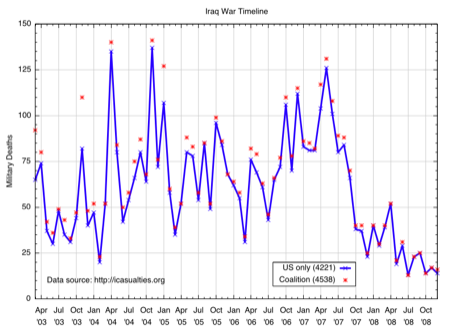 I hope Obama rethinks his position on Afghanistan. I thought, and still think, that invading Afghanistan was the right response in 2001 and 2002. And of course I agree that abandoning it for Iraq in 2003 was a very bad idea, both morally and strategically. But I seriously doubt that we can rewind the clock by moving troops back five years after the fact.

I don’t want to stop posting these graphs on Iraq only to start a new series on Afghanistan.