Back in December, I created a little script for monitoring GeekTool’s memory use. One of my other GeekTool scripts seemed to have a memory leak of some sort, and I wanted to know when to restart GeekTool to reclaim that memory. About a week later, I decided that GeekTool wasn’t chewing through memory and apologized for saying it was. Now I’m retracting the apology—there’s definitely a memory problem.

The problem script is the one that puts the album art of the current iTunes track on the desktop. I run it along with the script that shows the track info. 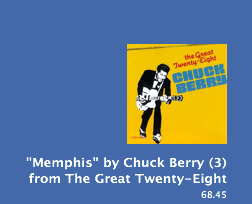 The problem is the album art script, for reasons I don’t understand, causes GeekTool to use more and more memory the longer it runs. I first noticed this when running Activity Monitor to check into another application. I wrote the memory monitoring script to keep track of GeekTool’s memory use and display it (in megabytes) just below the track info.

I apologized to GeekTool because that first week of running the memory monitor showed almost no increase in memory use, but now that I’ve run the monitor for several months it’s clear that the Album Art script really does cause GeekTool to eat up more memory. I was too quick with the apology.

Why bring this up now? My web logs show that I’m getting several visitors from this Flickr page by Cristopher Boyer, which references the Album Art and track info scripts. Boyer says he’s not experiencing the memory leak problem, but others might. Using the memory monitor script will let them keep track and restart GeekTool if necessary.