Last year I bought a Blackburn Voyager 4.0 light for my bicycle. While I’ve always liked the amount of light it put out, the way it mounts to my handlebar has been a source of concern and frustration. Today the body of the light broke off the mounting hardware, due in large part to the design of the light. I won’t be replacing it with another Blackburn.

Here’s the Voyager 4.0 as depicted on Blackburn’s web site. 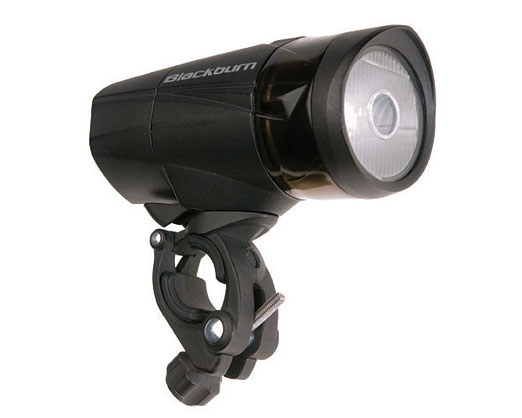 The light comes in two large pieces. The body of the light is a tapered cylinder that weighs 8-9 ounces. On the bottom of the body is a slot that connects it to the mounting piece. 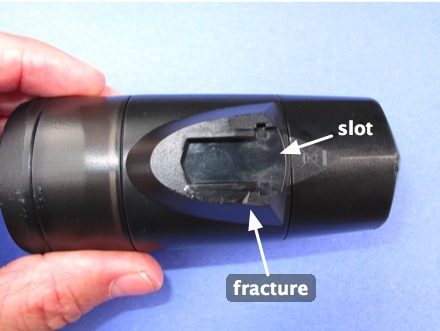 (Don’t worry about the fracture just yet; we’ll talk about it later on.)

The mounting piece has a clamp that grips the handlebar and a pair of flexible arms that squeeze inward as they slide into the slot of the body. The arms spring out and a barb on each arm engages with a detent inside the slot when the two pieces are slid together fully. 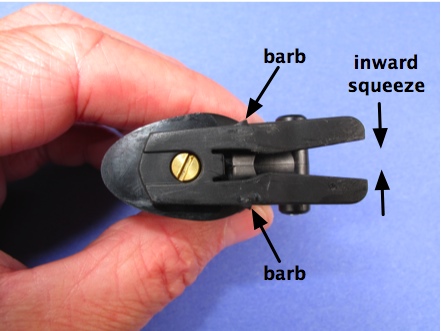 There are two problems with this design. One problem became evident on the very first ride I took after installing the light. There’s no popping sound as the arms spring outward, nor is there any significant clicking feel when you hit the detent. There is, however, a decent amount of friction between the slot and the arms; the resistance to further sliding can lead you to believe you’ve got full engagement when you haven’t. That’s what happened to me when I installed the light and went on my first ride with it. After a few decent bumps, the body slid off the mounting hardware and fell to the pavement.

Fortunately, the light still worked, and from that point on I tried to ensure that the arms had sprung back out every time I reinstalled the light. Despite my care, it did pop off one other time, earlier this year.

The second problem with the design is what caused today’s failure. The plastic along the edges of the slot is simply too thin and weak to support the mass of the body. I had my bike parked on grass next to a sidewalk as I relubed the chain. The ground around here is soft from all the rain we’ve had this spring, so the kickstand sunk and the bike fell over to the left onto the sidewalk. The plastic along one edge of the slot broke and the body of the light popped off.

Here’s a more detailed view of the broken area. 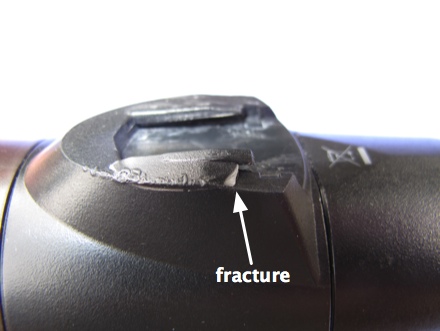 The whitened area is common in plastic fractures. It’s known as “stress whitening”1 and is due to subsurface micro-cracking at high strains.

You might be wondering if the fracture occurred when the light body hit the sidewalk. If that were the case, my complaints about the design would be unfair to Blackburn, as that would be a pretty significant impact. I can assure you that’s not how it happened. Here’s a front view of the two parts of the light, oriented as they would have been as the body broke away from the mounting hardware. 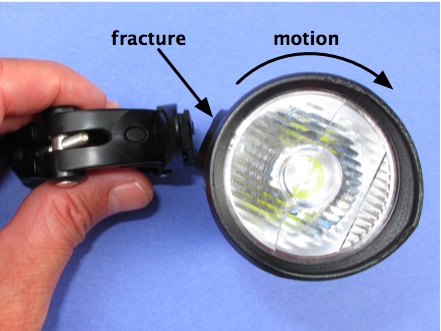 For the fracture to be where it is, on the upper edge of the slot, the light body must have been rotating as shown in the picture—clockwise as viewed from the front. Had the body of the light hit the sidewalk, the rotation would have been in the opposite direction and the edge of the other side of the slot would have fractured. (The geometry of the handlebar and the light’s position on it also make it very unlikely that the light would strike the sidewalk while still mounted.)

Time to start looking for another bike light. This time I’ll pay as much attention to the structural design as I do to the light output.