Due date bug in OmniFocus

A new version of OmniFocus for the iPhone, version 1.5.2, showed up in the App Store yesterday. In addition to bug fixes, it has a few new and changed features. One of the changes is the default due time, which has been moved from 8:00 am (I think that’s what it was) to 5:00 pm. This happens to be the due time I use most often, so it’s a welcome change. But it’s not quite as useful as I thought it would be.

Let’s say you’re entering a new task that you’d like to complete by the end of the day. You put in the description, project, and context 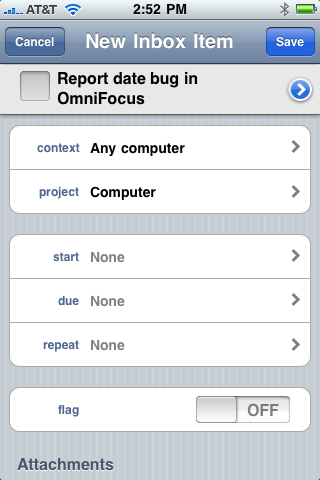 and then tap the due line to enter the date and time. 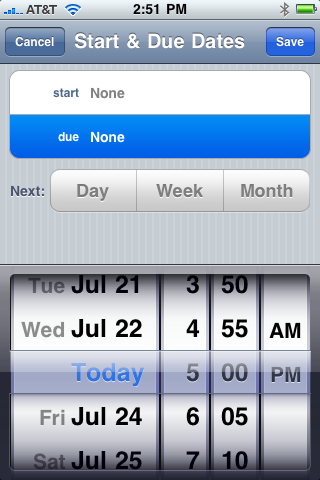 Because of the new default, the date and time are already set to exactly what you want. So you tap the Save button, which takes you back to the previous screen,

and you find that it’s literally the previous screen—the due date is still set to “None.” What happened? Well, take a look at the Start & Due Dates screen again. The due date up at the top of the screen starts at None, and it will stay that way unless and until you fiddle with the dials. So the only way to get the default due date is to roll one of the dials away from the default and then back to it.

This is a poor design choice by Omni. If you tapped the due line in the New Inbox Item screen, it should be assumed that you want to set the due date. The due line in Start & Due Dates screen should start out with the default value, not None. After all, what’s the point of having a good default value if to fiddle with the dials anyway?

It’s possible that OmniFocus has always worked this way when setting the due date—because the previous default was never what I wanted, I never used the default before.

Update 7/24/09
I started a thread on this topic at the OmniFocus forum. Apparently, OmniFocus has worked this way for a while, and other users have been bothered by it, too. Ken Case of Omni thinks our complaints/suggestions are reasonable and will look into changing the behavior. That’s encouraging, and it’s nice to get a prompt response.

The thread also contains a comment from user Greg Jones about similar behavior in setting due dates in OmniFocus for the Mac:

It might be worth mentioning that this behavior is not limited to the iPhone. The behavior on the Mac side is even more bizarre. If you create a task on the Mac side by clicking on the small column calendar icon, the pop-up calendar has today’s date is highlighted and the due time is pre-filled with the default value. The due date field in the column shows the current date, suggesting that this is the value that will be entered.

Hitting return dismisses the pop-up calendar and the due date field changes back to blank. What’s worse, you can bring it up as I just described, change the due time, and the date/time value is still not entered into the due date field unless you also click on a date in the calendar.

For some reason, I hadn’t run into this issue before, but it works (or fails to work) just as described. As with the iPhone problem, forcing the user to edit the value regardless of what it is defeats the purpose of having a default.