I use my iPhone’s clock application quite a lot. The countdown timer reminds me when my tea is done brewing and the burgers need to be flipped on the grill. The alarm wakes me up when I’m on the road. And while I don’t use the stopwatch for timing races, I do use it at work to time the the duration of experiments. Its ability to count and time laps allows me to time several sequential events while also keeping a running count of the total duration. I’ve noticed, however, that the user interface is slightly off when the timing of laps is finished.

Here’s what the stopwatch looks like when you first open it. 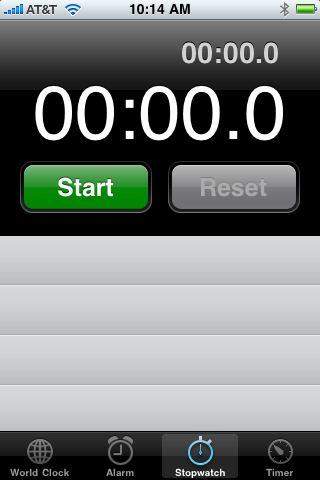 When you start the watch, both the large white time display and the smaller white display above it begin to count, and they do so in concert. The Start button changes to a Stop button, and Reset changes to Lap. 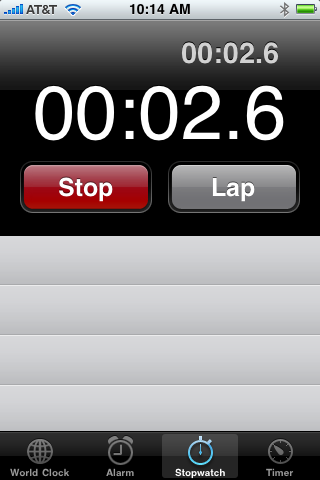 When you finally press the Stop button, the screen looks something like this:

In this example, four laps have been timed, each in the 2–3 second range. The total time elapsed is given by the large white display, as expected. What’s not expected is that the final lap doesn’t appear in the list in the lower half of the screen; it’s given only in the smaller white display at the top. The problem with this presentation is that at first glance you would think that only three laps have been timed. When the Stop button is pressed, the final lap should be added to the lower list, and the smaller white display should be reset to zero to indicate that there is no current lap.

Oh, and one more thing: Now that we’re in the era of copy and paste, all the numbers in the stopwatch should be made selectable so we can paste them into Notes and Mail. It would be best if the entire list of lap times could be copied at once.