I’ve started using the RAW format on my Canon G10 and have run into a small annoyance when importing into iPhoto. Both the RAW image and an accompanying JPEG of the same photo are imported, giving me two images for every photo. 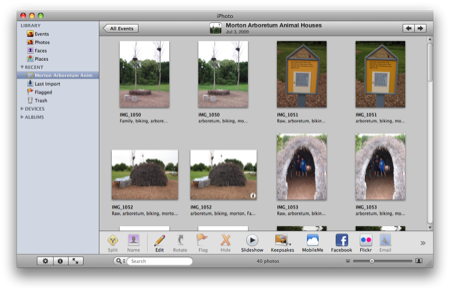 The JPEGs seem unnecessary; they contain less information than the RAWs and new JPEGs can always be generated from the RAWs. Selecting the JPEGs and deleting them is easy when I’m importing only a few images, but it’s tedious when importing dozens. Here’s a semi-automated to do it.

Here’s the AppleScript that does the selecting:

The script takes advantage of the fact that iPhoto automatically gives every RAW image the “Raw” tag. As usual, a seemingly simple AppleScript actually involved much trial and error to make sure the distinctions between strings, lists, and the ever-mysterious “references” are honored. Also note the “English-like” construction in Line 4:

The script would be much better if I had been able to write it like this:

This would select only those JPEGs that have a corresponding RAW, and Step 3 of the procedure wouldn’t be needed. Unfortunately, trying to run this script leads to an error:

This is, apparently, a known problem for which I couldn’t find a straightforward workaround. If you know of one, email or Twitter me.

Update (7/10/09) After reading this post at maccreate.com, I went looking for a setting to prevent my camera from automatically creating a JPEG along with the RAW. This morning I finally found it. Not making or importing the JPEG in the first place is a much better solution than what I’ve described in this post.