An unusual bike accident occurred in Naperville last week. According to news reports, two high school-aged boys were riding their bikes on the sidewalk in the downtown business district. A cop told them they had to ride in the street. One of the boys was then hit by a car driven by an older woman. According to the boy, she gunned the engine and drove at him. He jumped off the bike just before impact, avoiding serious injuries. The car drove off, with parts of the bike still in the grill or undercarriage.

Several motorists reportedly used their wireless telephones to call police and report the car driving away with Peterson’s bicycle beneath its wheels.

The car and the woman were later tracked down and she’s facing felony charges.

In a followup story, the Naperville Sun interviewed three people, all of whom work at local bike shops, looking for advice on how drivers and cyclists can avoid accidents. I have nothing against the guys interviewed, and I understand that it’s easy for the reporter to find regular cyclists among bike shop staff, but I don’t think this group makes for a particularly balanced pool of interviewees. You’re likely to find pretty extreme cyclists in bike shop workers. For example, one of the three—presumably an adult—doesn’t own a car and was quoted as saying “Cars are evil.” Not your typical suburbanite. I happen to know one of the other guys; it wasn’t mentioned in the article, but he rides to work year-round. Over ten miles each way. In northern Illinois. I ride a lot, and even I think that’s crazy.

I’m in downtown Naperville fairly often—in my car or with my bike or on foot—and I’m quite familiar with its automobile, bicycle, and pedestrian traffic. More so, I suspect, than the three guys interviewed for the story, none of whom actually live in Naperville or work near downtown. Since the Sun didn’t bother to interview me, I’ll give my opinions here.

First, the driver has no business behind the wheel. Whether she hit the bike deliberately or not, it seems indisputable that she drove for over a mile with the bike tangled in her car. She’s either dangerously angry or dangerously oblivious and needs to be off the road.

Second, the kids shouldn’t have been riding their bikes on downtown sidewalks. Apart from what the law says, that’s just simple courtesy. There are too many pedestrians. Of course, courtesy is not a quality generally associated with teen-agers, so it’s not surprising to hear that they needed to a reminder.

However, if a police officer told the kids to ride in the street, he or she should be reprimanded. Naperville motorists aren’t used to seeing bikes on their downtown roads and aren’t likely to be good at sharing the lanes. Again, I don’t care what the law says about bikes having a right to be on the street; it’s dangerous to ride on the street in downtown Naperville.1 The cop should have told them to walk their bikes on the sidewalk until they were out of the crowded business district.

Overall, I think Naperville is pretty bike-friendly; there are many bike lanes and bike paths around town. But downtown is definitely bike-hostile. The only bike lane there I can think of is ridiculous. 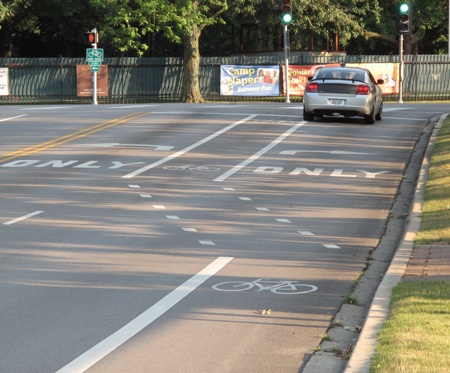 I swear this picture is not photoshopped, although a CSI-style outline of a body would be an appropriate addition between the dashed lines. There really is a bike lane that swings out from the right curb, crosses a lane of traffic, and then runs between two lanes of autos. It’s on one of the few streets downtown that cross the DuPage River, so car traffic is steady—it took me a while to get a photo with just one car (note also that the car has strayed into the bike lane). The idea clearly is to keep cyclists away from the right-turning cars at the intersection, but it’s a fair question to ask whether that was to make it safer for the cyclists or easier for the cars. Whatever the answer, you won’t catch me riding in that lane.