If you’re the type of person who likes to figure out how to use your calculator to make upside-down naughty words, you probably heard about PCalc’s latest revision. I didn’t write about PCalc 1.8 when it was released because—apart from its little dig at the App Store’s age-rating system1—there weren’t many new features worth writing about. Plus, upside-down words only work when if you use PCalc’s LCD font, and I always use Easier To Read.

The new release did remind me, though, that I have for some time combined two of PCalc’s features to make its extensive function set more readily available. I haven’t seen anyone else mention this simple trick, so I figured it was worth a quick post.

PCalc has several different keyboard layouts with different sets of functions available in each layout. Normally, I work with the Engineering layout, which has the power, trig, and exponential functions usually associated with a scientific calculator. Occasionally, though, I need the hex conversion and bit functions found in the Programming layout. In the past, I’d go into the PCalc preferences to change the layout when I needed a Programming feature, then change back to Engineering when I was done. Eventually, I realized this was stupid and set up PCalc to save me some time.

Like many iPhone apps, PCalc can be used in either the vertical or horizontal position, and the keyboard layouts for these two positions are independent of one another. So now I have the vertical layout set to Engineering 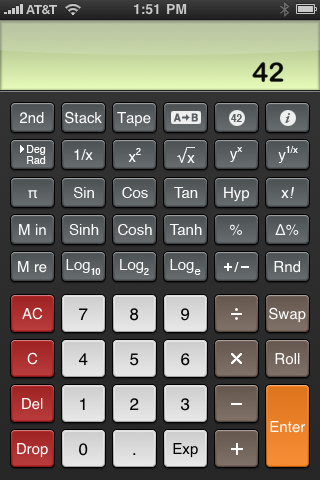 and the horizontal layout set to Programming 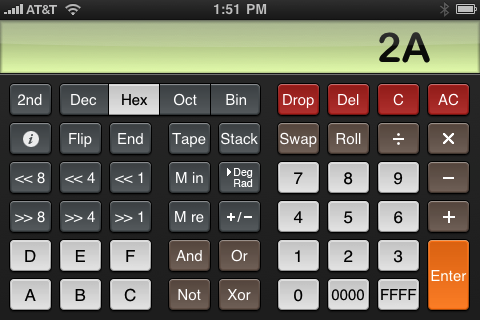 and whenever I need to do something in hex, I just turn the phone sideways.

Am I embarrassed that I didn’t see this opportunity right away? Yes. I was probably distracted by the 5318008.