and get back this

I decided to use Octave as my scripting language because it has a binomial PMF function built in (binopdf1). I’ve written scripts in Octave in the past, but I’ve never tried to pass arguments to those scripts and wasn’t sure how to do it.

It won’t surprise anyone with C/Shell/Perl/Python/Ruby experience to learn that the Octave function that grabs the command-line arguments is called argv. It takes all the space-separated arguments and puts them in a cell array, a heterogeneous data structure comparable to a list in Perl/Python/Ruby. Cell arrays are distinguished from regular (homogeneous) arrays by the use of curly braces ({}) for indexing instead of straight brackets ([]). The arguments come in as strings, so if you want to pass in numbers (as I did), you’ll have to convert them.

Here’s the script I came up with

The shebang line includes the -q option to prevent Octave from printing its version and copyright information when it starts up. Lines 3 and 4 get the arguments and turn them into numbers. Line 5 creates the 1D array of success counts, and Line 6 uses that to create the 2D array of success counts and associated PMF values. Here you see one of Octave’s strengths: its ability to apply functions and operators to entire arrays at once—no need for map or list comprehensions. Line 8 formats and prints the results. 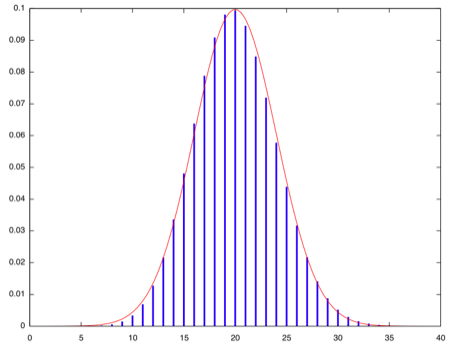