Tribune's head in the cloud

The gist of the piece is how cloud computing is the future of computing and, of course, how wonderful this new data center—and, by extension, Microsoft—is. The article includes a big photo, thoughtfully provided by Microsoft, sighting down a row of blue, futury-looking servers in the center. What the article does not include is any mention of the huge loss of data that hit T-Mobile’s Sidekick cell phone users this weekend. The Sidekick apparently stores all its data in the cloud, and when the servers went down, they took all that information with them. The failed servers were operated by a company called Danger, which happens to be a Microsoft subsidiary.

Now I’m sure the fluff article was researched, and probably written, a while ago. But you’d think someone at the Tribune—the writer, Greg Burns, or one of his editors—would have recognized that an article extolling the virtues of MS cloud computing would have to at least mention the Sidekick disaster. You’d be wrong.

Fortunately, the list of links on the Tribune web site does, in a small way, what the article should have done. 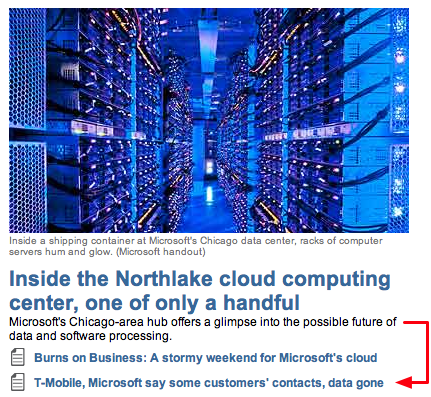