My sons and I saw Cloudy with a Chance of Meatballs last night at a local second-run theater and enjoyed it thoroughly. Like all kids’ movies, it had Lessons For Us All (I think that’s a legal requirement), but it managed to keep them pretty well confined. And any movie able to use both James Caan, Mr. T, and Al Roker effectively is worthy of support. But I did have one problem with the film.

The story is about Flint Lockwood, a failed inventor, and the people who live with him on a little island in the Atlantic. The island is a dreary place where everyone lives on a diet of sardines. After years of screwups, Flint finally comes up with a device that works: a machine that alters the genetic components of water to create any kind of food. The machine gets shot up into the sky, where it gathers water from the clouds and rains food down onto the island. This starts out wonderful, but then turns dangerous.

You might raise an eyebrow at the notion of water having genes, but that’s an issue for a biochemist. I’m a civil engineer, and what horrified me was the brief view we get of the dam on the island.

The dam is built to hold back the excess food. Much more food falls from the sky than can be eaten, so Flint makes a machine that scoops up the leftovers and flings them across the island into a sort of garbage reservoir retained by a dam. The dam seems to be modeled on Hoover Dam, with a nice horizontal arch. 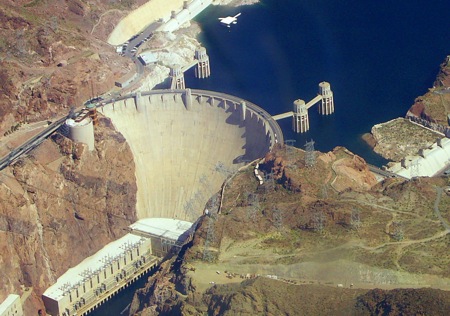 (Image adapted from snakefisch at Wikipedia.)

Arches are used in dams for the same reason they’re used in bridges and buildings: their geometry allows you to span large distances without generating tension in the structure. This is important when the structure is made of masonry or concrete, materials reasonably strong in compression but notoriously weak in tension. To work, an arch has to be curved into the load; upward in bridges and buildings to resist downward gravity loads, and into the water to resist sideways pressure in dams. You see how Hoover Dam is curved into Lake Mead.

And that’s what horrified me about the dam in Meatballs: it’s curved the wrong way!1 Being curved away from the load puts the dam entirely in tension. No wonder it—spoiler alert!—bursts and floods the town with leftovers during the climax. It should never have lasted as long as it did.

Normally I’d keep nerdy thoughts like these to myself, but releasing your inner nerd is one of Meatballs’ Lessons For Us All. I eagerly await a meteorologist’s comments on that clockwise-spinning spaghetti tornado.