Last week a client sent me a bunch of paperwork to go through as part of an engineering analysis of a broken device. Part of the file was a photocopied product manual, the pages of which, unfortunately, had not been collated by the copy shop. So I had a run of odd-numbered pages, then a run of even-numbered pages, then another run of odds, another run of evens, and so on. The manual was a few hundred pages long—long enough to make the collation annoying but not so long that I felt justified in sending it out to a local print shop to do the job. I would be doing it myself.

I made an odd stack and an even stack and began the tedious process of putting the two together. The trick to making this go smoothly is to set up the stacks so that picking off individual sheets is easy. I’ve noticed, when seeing others sort through paper, that most people don’t know how to do this; there’s a lot of unnecessary (and unsanitary) wetting of fingers to try to keep from grabbing sheets two and three at a time. So I’m going to demonstrate how to avoid that. If I were 20 or 30 years younger, I’d probably call this a “lifehack,” which proves that there are some advantages to growing older.

The trick is to get the sheets offset a bit from one another so your thumb will touch only one sheet as you run it along the edge. Here are the four steps: 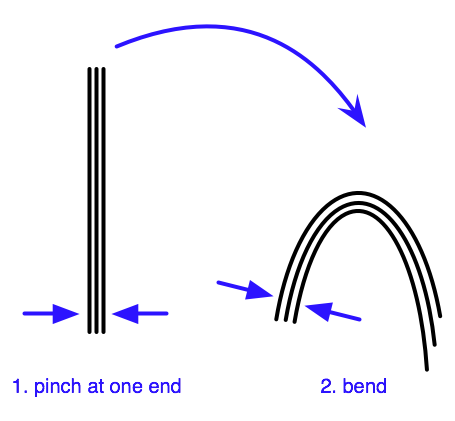 In these edge-view sketches, I’ve exaggerated how much the pages shift as you bend the sheaf. In reality, you’ll have to repeat the process a few times to get the offset big enough. When you’re done, the pages will be nicely arranged. 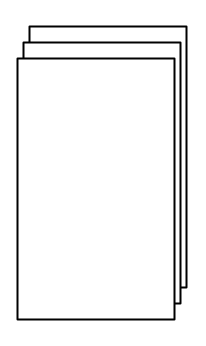 I’ve used this trick for sorting photos and card stock, too. Thicker sheets slide farther with each bend, but you have to be careful not to crease them.

As a structural engineer, I see the connection between this trick and the development of shear stresses in beams, but I’ve been nerdy enough for one post and won’t inflict that on you.