Looking through my RSS reader this morning, I noticed that Andy Ihnatko has installed a WordPress plugin that collects and summarizes his Twitter stream from the previous day and publishes it as a blog post on the Celestial Waste of Bandwidth.1 Since I

I’ve used Yahoo! Pipes to create a customized feed that filters out the Twitter summary posts. 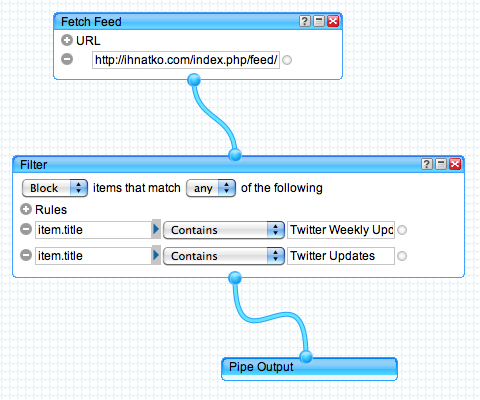 The URL for the feed is at this link.

Regular readers of this blog may be arching their eyebrows. Didn’t Dr. Drang inflict exactly the same sort of redundancies on us last year? Yes, I did, and I’m sorry for it. In my defense, I’ll point out that I

I wouldn’t be surprised to see Andy go through the same steps.

Update 2/17/10
I think Andy has turned off the daily Twitter update, but a few days ago a weekly Twitter summary showed up in my RSS reader. I’ve reworked the above-linked Yahoo! Pipes filter to get rid of those, too. The screen shot shows the current filter.