A new version of PCalc for the iPhone has appeared in the App Store. The big new feature in version 1.9.2 is currency conversions, with the rates downloaded from the European Central Bank.

While beta testing this new version, I realized that for all my blogging about PCalc, I’d never spent any time on its unit conversion features. So here’s a video showing how it works. I don’t do any currency conversions, but they work the same as the length and angle conversions in the demo.

(This is straight from the camera—no editing—so there are a few more “ums” than I’d like. Sorry, too, about the interference bands waving around on the screen. There’s probably a way to prevent them, but I don’t know what it is. If I were PCalc’s developer, I could do the demo in the iPhone simulator and record a screencast off my Mac. Instead, the phone is propped up on a Gorillapod, and the camera, a Canon G10, is sitting on a conventional tripod.)

(Another parenthetical apology: the embedded video is Flash. If you’d prefer to see it in beautiful HTML5, you can do so on its Vimeo page.)

PCalc has a huge number of preferences. The settings that most affect what you see in the video are:

The Recent Conversions and Recent Constants features are important for quick use, because they allow you to repeat conversions without digging down through the (unavoidable, I think) hierarchy of units. One thing I didn’t mention in the video is the little circle of arrows button to the right of each Recent Conversion. 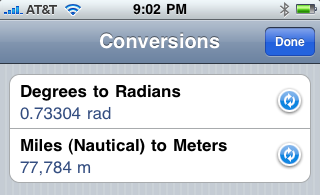 Tapping this button reverses the conversion—in effect doubling the number of Recent Conversions saved. PCalc is filled with little niceties like this that make using it a pleasure.

When working on one of my Macs, I tend to use Octave as my calculator and the old Unix units program as my converter. It’s OK that they’re separate programs because I can have them running simultaneously in different windows and quickly bounce between them—in fact, I prefer it that way because each program can concentrate on what it does best. But in the restricted environment of the iPhone, it’s important for the calculator and unit converter to be bound together in the same app. PCalc recognizes that and handles both functions.