You’ve probably seen Merlin Mann’s little screencast about TextExpander 3. He does a nice job of showing dynamically what I tried to show statically in this post: TE3’s new feature that lets you define snippets with multiple fill-in-the-blank fields. Watching the video, I learned a couple of things about Merlin’s use of TextExpander:

Because I also have my abbreviations expanded immediately, I’m a bit surprised Merlin doesn’t use a “signal character” to distinguish his abbreviations. Let me explain what I do and why.

First, delimiters. TextExpander’s Preferences give you the option of expanding snippets as soon as you finish typing the abbreviation or waiting until you’ve typed a delimiter. 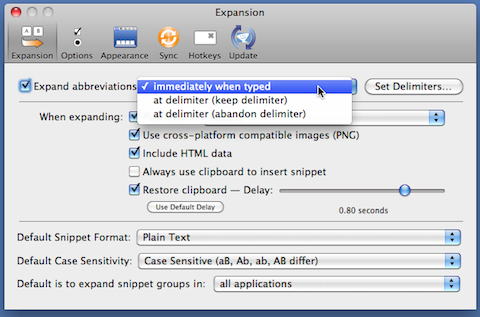 A delimiter is typically a “word-ending” character: a space, a tab, or any one of a number of punctuation marks. 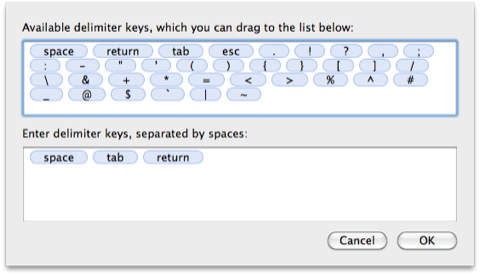 Unfortunately, forcing TextExpander to wait until a delimiter is typed isn’t a complete solution. Depending on context, “te” might make a great variable name, and if I wanted a program line like

TextExpander would turn it into

You can tell TextExpander not to expand abbreviations in certain applications, but that does me no good, as I write both regular text and programs in the same application. (At the beginning of Merlin’s screencast, you see that he uses “sdate” as one of his abbreviations. That’s an even better variable name than “te.”)

Also, I have TextExpander fix some of my common typos. I have an “hte” snippet that expands to “the.”1 By using immediate expansion instead of delimiters, that snippet works to correct “htere” and “hten” as well as “hte” itself.

So, since delimited expansion doesn’t get me what I want, I use immediate expansion and a trick. The trick is to always start my abbreviations with a semicolon. There are no situations in my writing or programming in which a semicolon will be followed by anything other than whitespace. In English, a semicolon is always followed by a space; and in programming it’s almost always a statement delimiter—illegal to use in a variable name. Yes, most languages allow you to squeeze statements together,

but that’s not considered good style unless you’re doing a Perl one-liner on the command line. It’s not something that comes up in my programming.

The semicolon is the perfect special character for abbreviations not only because of its use in English and programming, but also because of its position on the keyboard. It’s one of the home keys and it doesn’t require a Shift. Typing it is almost effortless.

These are, I think, the natural abbreviations to use, and because they are real words, they wouldn’t work as abbreviations if it weren’t for the leading semicolon.

I know I’m not the only one who does this. I’m pretty sure I once saw a Twitter exchange between Jason Snell and John Gruber in which they each learned that the other used leading semicolons. When I saw that, I knew I was in good company.