The expected (confirmed?) 960 × 640 resolution of the upcoming iPhone’s screen has led to a couple of good articles on how increased resolution should be handled in an HTML/CSS environment. Everyone seems to be expecting Apple to handle the change gracefully, and I hope that’s so. But I’ve been discouraged by its handling of increased screen resolution on the Mac.

In the beginning, the Mac had a 72 dpi black-and-white screen. That the pixel was sized to equal a printer’s point was an important part of the Mac’s WYSIWYG appeal. In those days, what you printed came out the same size as what you saw on screen.

This is 1.3 times the linear resolution of the original Mac—and isn’t nearly as dense as some of the current MacBook Pro resolutions—but the software hasn’t adjusted to this new hardware reality.

If I open Pages or OmniGraffle and set the zoom to 100%, the rulers in these programs lie to me. Here’s a physical ruler held up against OmniGraffle’s ruler. 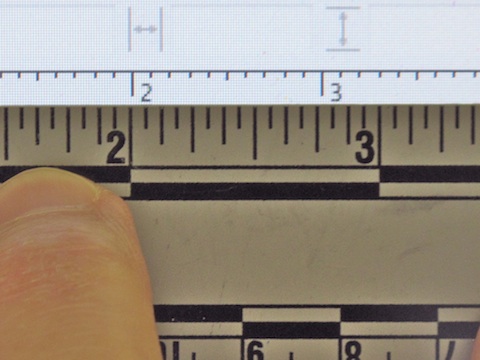 Because the software still considers an inch to be 72 pixels, it takes 1.3 “screen inches” to make 1 real inch.

This has consequences, especially in applications that don’t have a zoom feature (ahem). At “100%,” 12-point text is sized like 9¼-point text, which is just too small for me to read comfortably anymore.

You may recall that Leopard was supposed to give us resolution independence. It didn’t, and neither did Snow Leopard. If you have the Developer Tools installed, you can try adjusting the User Interface Resolution via the Quartz Debugger application, but the results aren’t ready for prime time. Presumably, Quartz Debugger has this feature so developers can test their user interfaces against various resolutions and be prepared for that great day in the future when 100% means 100%.