A kind word about Stickies

You may have seen this Lifehacker article from yesterday, about using Fluid and a small local HTML file to make a hideaway scratchpad for little bits of text. I heard about it from Todd Ditchendorf’s tweet today. I’m a big fan of Fluid’s, and love making site-specific browsers (SSBs) with it, but this is just a stupid idea. It’s “tips” like this that took Lifehacker’s RSS off my subscription list years ago.

Why is it a stupid idea? It’s certainly not because I’m opposed to homemade hacks; this blog is clogged with my homemade hacks (and those are just from the last few months). No, it’s because every Mac ships with a little application that does exactly what this hack is supposed to do and does it better. I refer, of course, to Stickies.

I used to think Stickies itself was stupid—who would want their screen cluttered up with colored rectangles? But that was before I discovered that Stickies has a magic power, a power known to the ancients back in the days when Mac OSes were numbered in Latin instead of Roman. It’s the power of windowshading. 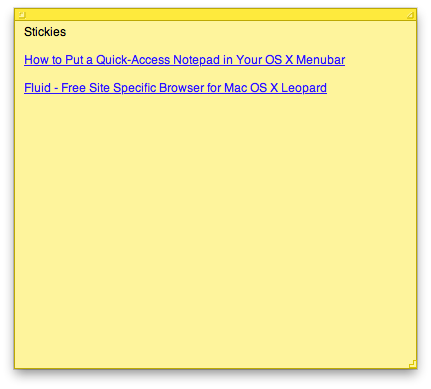 And here’s what it looks like after you double-click the darker yellow strip along its top edge.

Why is this better than minimizing any old text window to the Dock? Because icons in the Dock move around; a rolled-up window stays where you put it. I always have Stickies running with just one tall sticky that I keep tucked up just below the menubar near the right edge of my screen. As I find bits of text I want to save, I double-click the strip to unroll the sticky, paste in the text, then double-click again to roll the sticky back up. Every few days, I delete the bits of text I don’t need anymore.

Try doing that with an HTML <textarea> field.