A few weeks ago, a latch on our computer desk stopped working. It’s the spring-loaded latch on the keyboard drawer that keeps the drawer front in a vertical position, hiding the keyboard, when the drawer is pushed in. 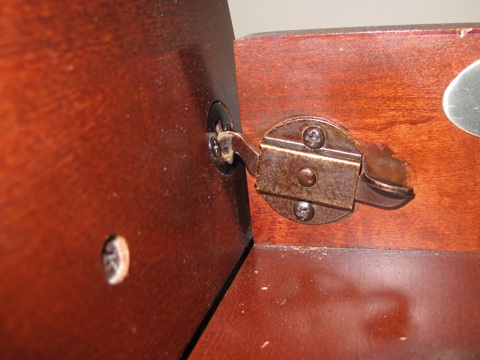 The spring in the latch broke, so the hook on the left side of the latch would no longer catch on the slot of the drawer front. Since I don’t use the computer desk myself, the broken latch didn’t bother me, and I didn’t get around to fixing it until today.

I had assumed the broken spring was a helical torsion spring wound around the pivot of the lever, and my plan was to fashion a new torsion spring to replace it. When I took the latch off the drawer, I found that

So the idea of a new torsion spring had to be abandoned.

My fix was quick and simple, although it may not be long-lasting. I bent a staple into a dogleg with a hook on one end. I slipped the hook into a convenient slot in the lever1 and superglued the staple alongside the remnant of the leaf spring. 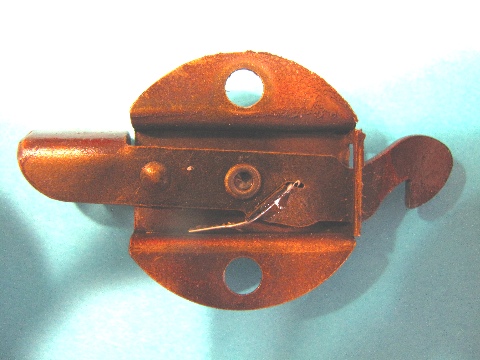 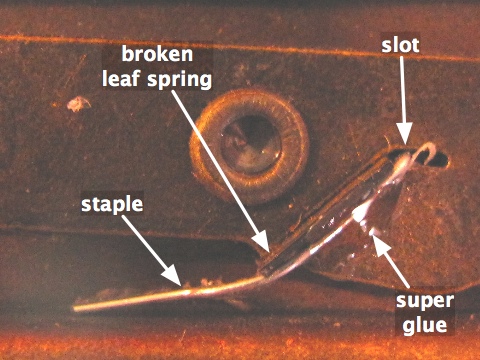 The bottom tip of the staple bears against the body of the latch—just as the leaf spring did before it broke off—and pushes the hook down into the slot.

I suspect this will be a temporary repair because the staple is made of a low carbon steel with a relatively low yield strength. This made it easy to bend into the final shape but will probably also give it a short fatigue life. Had I had any high strength wire with a small enough diameter to fit into the slot I would have used it instead.

Maybe I’ll be lucky and the staple will last several years. Even if it doesn’t, at least I have a working latch again, and I know how to make a more permanent repair next time with a piece of spring wire.