I’ve seen some indications on Twitter that the latest version of TaskPaper for iPhone—version 1.2.3, first available today—is crashing on launch. The developer, Jesse Grosjean, has asked users who are having this problem to send him crash reports.

I’m still running the previous version of TaskPaper and have decided not to upgrade just yet. I’m not worried about the possibility of crashing—because it’s a holiday weekend, I could live without TaskPaper for a few days. But, also because it’s a holiday weekend, I won’t be at the computer to which I sync my iPhone for a few days; if I get any crashes, I won’t be able to get the crash reports and send them to Jesse until next week.

Crash reports for your iPhone are kept in the

folder in your home directory. Replace <device name> with whatever your phone is named in iTunes. Inside that folder are a bunch of files, most of which are named according to the app that crashed and the time at which the crash occurred. 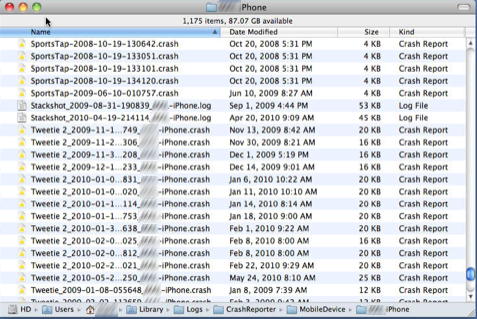 These are the files the developer would like to see when you complain about a bug. Just attach the files that correspond in time to the problem you’re having to your bug report.

PS: Sorry about the crappy screenshot above. I captured it from my work computer via screensharing and did a poor job of cropping.