To be played at maximum volume

What better way to celebrate the Fourth than to listen to BBC Radio documentaries? 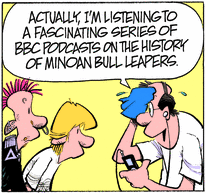 I spent yesterday afternoon resetting bricks in the patio and listening to my iPod. First up was last week’s episode of In Our Time, the history/literature/philosophy/science/math Radio 4 series hosted by Melvyn Bragg. The topic was Athelstan:

Athelstan, the grandson of Alfred the Great, came to the throne of Wessex in 925. A few years later he unified the kingdoms of England, and a decade after that defeated the Scots and styled himself King of all Britain.

As well as being a brilliant military commander, Athelstan was a legal reformer whose new laws forever changed the way crime was dealt with in England. Unlike his predecessors, he pursued a foreign policy, seeking alliances with powerful rulers abroad. And unusually for an Anglo-Saxon king, we know what he looked like: he’s the earliest English monarch whose portrait survives.

This is the quintessential In Our Time topic: so English it predates the Norman Conquest. If that doesn’t fire up your patriotic juices, I don’t know what will.

Second was a two-part Radio 2 documentary on the slightly more contemporary—though no less British—topic of glam rock. I liked the show overall, but suggest you fast forward through the first 20 minutes or so. That section is dominated by the reminiscences of producer Tony Visconti, and it’s unbelievably dull—yes, far duller than the discussion of Athelstan’s victory at the Battle of Brunanburh. Visconti has flat, affectless voice and it sounds like he’s reading from his 1970 diary: “Then Marc came over to my flat on Tottenham Court Road, and we had a curry.”

Fortunately, it picks up after that. American listeners may be surprised to hear that there was a real competition between Marc Bolan and David Bowie. There was no T. Rextasy on this side of the Atlantic, where Bowie was far and away the dominant figure.1

Glam was more about the look than the sound, and the documentary spends a lot of time describing the bands’ outfits—a topic you’d think would be more suited to TV than radio. But somehow it works.2 The interviewees (with the exception of Visconti) are funny and interesting, and the music is always playing under the talking. One surprising omission is that no mention is made of glam’s obvious influence on hair metal of the ’80’s.

The two episodes of The Glory of Glam are available for listening (or recording via Audio Hijack Pro or Wiretap Studio) for a couple of days. The Athelstan show can be downloaded directly from the In Our Time archive.