I’ve never had much reason to complain about AT&T from a technical point of view. Yes, its server problems on the iPhone 4 preorder day were annoying, but I’ve never had the poor connectivity and dropped calls that other people have. Generally speaking, I get what I pay for.

But AT&T is amazingly inept at customer service.

If you’ve been an AT&T customer for any length of time, you know that its website is slow, poorly laid out, and difficult to navigate. The only thing worse than buying a phone on AT&T’s website is buying one at a physical AT&T store, where the service is so slow you’d be well advised to pack a lunch.

These, however are old issues. More recently, AT&T has tried to be more up-to-date and friendly. In the past week, I’ve seen three examples of the new AT&T customer service.

First, a few hours after picking up my new iPhone 4, I got this text message: 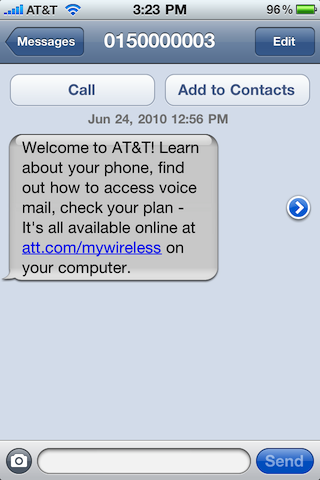 Friendly, to be sure, but I’ve been an AT&T wireless customer since it was Cingular. With the same phone number, too. “Welcoming” me to a company I’ve long been with isn’t the worst thing in the world, but it does look stupid.

Then I installed the myWireless app. Because my cellular network needs have been relatively light in the past—I’m usually around a WiFi hotspot—I decided to save a little money and go with the new 200 MB plan. The myWireless app was going to let me track my network use and bump up to the 2 GB plan if I found myself online a lot more with the new phone. I fired up the app, logged in, and flipped to the data use screen1, where I saw this 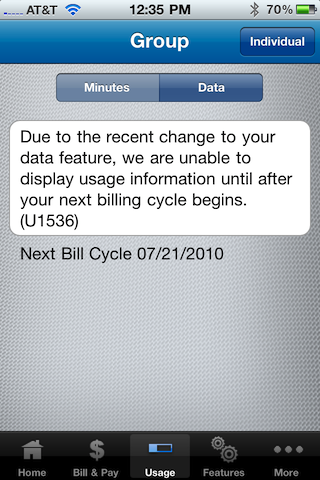 As you can see, my next billing cycle starts in late July, so I won’t be able to track my usage for four weeks. But you can bet AT&T is tracking it.

The third example is not my own. A friend bought an iPad for his wife, to be given as a surprise gift a week or so later. His helper at the Apple Store got it set up for him so his wife would have a working device when she took it out of the box. (A “bare” iPad asks to be plugged into a computer the first time it’s turned on.) He used his own name and credit card to pay for both the iPad and the 3G service plan, but the iPad itself was personalized with the contact information of his wife. A few hours later, his wife got—you guessed it—a welcoming email from AT&T, spoiling the surprise.

You could certainly argue that Apple was partially or fully to blame for this screwup, and I wouldn’t disagree. I suspect the Apple employee had no idea AT&T would contact anyone other than the person who was paying for the data plan—Apple’s welcoming emails (and receipt) went to my friend, not his wife. Keep this episode in mind if you want to give an iPad as a gift.

When it comes to Ma Bell, “customer” and “service” are not words that go together well.