One of the podcasts I subscribe to is Sound Opinions, a weekly radio show that comes out of WBEZ, Chicago’s public station. Last week’s episode had a special story on Chess Records, and the hosts, Greg Kot and Jim DeRogatis, played several classic sides from Chess’s heyday, including a song by Buddy Guy, who was never a great star at Chess but is considered a blues legend today.1 I was going to write a post about the show and tell a story about Buddy Guy but never got around to it.

Then today I read Merlin Mann’s post about Bill Nelson of Be Bop Deluxe and how he managed, through sheer virtuosity, to work his way through a song on a TV show after losing the tuning on his guitar through some aggressive whammy-barring. A good example of how true expertise can get you through a rough spot.

I have a similar but better example, which is the Buddy Guy story from the post I never wrote.

While in college in the early 80s, I went to a free show in the Illini Union sponsored by some student group. It was Buddy Guy and Junior Wells, who had by that time been playing together for at least 15 years. 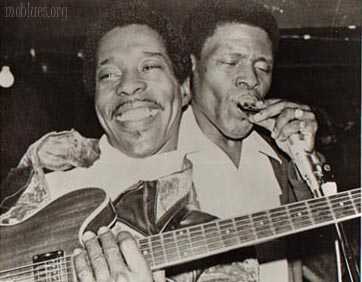 Buddy broke a string on the first or second song, but finished the song by playing around it, instantly working out other hand positions that he could use to get the sounds he wanted. No big deal to play with just five strings? It is when those strings suddenly go out of tune, which they did when the one string broke. So he’s lost one string and he has to bend/slide/mute/whatever the other five.

When the song finished, Junior covered for him while Buddy restrung. Junior didn’t tell stories or slow down the show in any way; he just started up a song that he could carry on his own for a while. As soon as the new string was on, Buddy joined in, tuning the guitar as he played. That continued for a song or two as the new string settled in and the others readjusted as the tension changed.

Now, everyone’s seen a guitarist tweak his tuning in the middle of a song: a quarter-turn of the peg here or there. That’s not what Buddy was doing. He was cranking on those pegs to get his instrument back in shape. While playing.

There was no Tufnelesque phalanx of guitars near the back of the stage for Buddy to choose from, nor was there a roadie to hand him a replacement. Just a man who knew his business so well he could deal with it without—literally—skipping a beat. Like seeing a hole in a sidewalk and stepping around it.

In some ways, the best thing about this story isn’t Buddy’s reaction to the broken string, it’s Junior’s—the complete confidence he had that his partner could handle whatever came up. No need to stop the show, Buddy’ll figure out what to do.