Because I’m currently using two iPod nanos and an iPhone, I’ve spent some time thinking about the pros and cons of different designs—of the iPods I have and of the new, touch-based, 6th-generation nano. 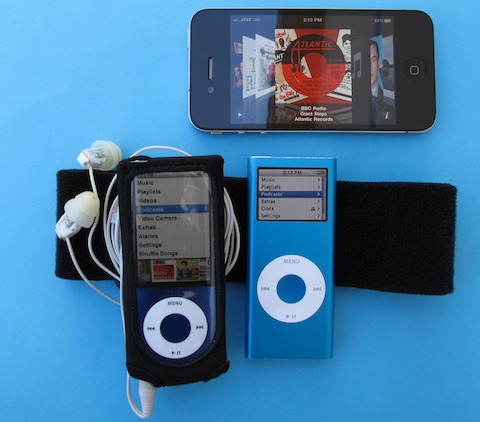 First, let me explain why I’m using so many iPods. Earlier this year, I replaced my 2nd-gen nano with a 5th-gen. The older one was still working, but its clickwheel was getting fussy—clicks that were a little off-center weren’t always registering. Plus, I had some Marriott points and could get a new nano1 for free.

Up until a few weeks ago, I was still using my old armband/case to hold the nano while riding my bike. It worked, but it wasn’t the best arrangement, because the case’s plastic window didn’t line up perfectly with the new nano’s clickwheel. On my birthday I got new armband/case that fits perfectly and works better than the old one did, even when it was carrying a matched nano.

The improvement is in the plastic window. The new case’s window is thinner and sticks tightly to the front of the nano, which makes the controls much more responsive. And, paradoxically, made me bring the old nano out of retirement.

The problem is I can’t get the new nano out of its case when I want to use it without the armband. OK, I can, but it’s a real effort to unstick it from the plastic window—not something I want to be doing every day.

In theory, I could detach the case from the armband and always use the nano from within the case. In practice, detaching the case will mess up the way I have the earbuds2 wrapped, and will force me to rewrap them every day. Which is slightly less annoying than unsticking the nano from the case, but only slightly.

So the old nano came out of mothballs to resume one of its former duties: as my “bed” iPod. I’m one of those people who falls asleep listening to his iPod (playing a talky podcast) and uses its alarm to wake up in the morning (playing the Who). There’s little clicking to be done in this type of use, so the wonky clickwheel isn’t a problem. In fact, because the 2nd-gen nano doesn’t have the alarm clock problems the 5th-gen does, the old boy is actually more reliable for this use than its great-grandchild.

Couldn’t I use my iPhone as my bed iPod? No. First, if my wife looked over and saw me sleeping with my iPhone, the divorce papers would be served before I woke; I spend to much time with the iPhone as it is. Second, I don’t find the iPhone to be very good as an iPod generally, and it’s especially bad in the dark because it has no hardware controls.

No, I haven’t forgotten the hardware controls on the earbud cord. I’m sure there are plenty of people who can wear Apple’s earbuds comfortably, but I’m not one of them. Especially not when I’m lying down with an ear to the pillow. And third party earbuds with click controls tend to be expensive. My sleeping needs are met perfectly by a cheap pair of Sony in-ear buds; they’re soft and comfortable when I’m lying on them and if they get damaged as I twist and turn overnight, they won’t cost much to replace.

The iPhone is my iPod when I’m not riding my bike or going to sleep, so when I say it’s my least favorite iPod, it’s an opinion based on real experience, not supposition. For me, the lack of hardware buttons is a problem. Again, I can imagine that it’s not a problem for people who like and use the Apple earbuds. And I certainly don’t think the iPhone should have hardware buttons—because it does so many other things, I’m fine with the iPhone being somewhat clumsy as an iPod.

So what about a touchscreen nano? Oddly enough, given my experience the iPhone, I think I could get along pretty well without the clickwheel on the nano. While I like the clicking part of the clickwheel for pausing, restarting, and skipping, I don’t like using it as a selector. I’m constantly finding myself overshooting the item I want, something I’m pretty sure wouldn’t happen with a touchscreen.

Obviously, having to use the touchscreen for play, pause, and skip would’t be as convenient as having the clickwheel always available. But I suspect the nano’s touchscreen will be easier to use than the iPhone’s for two reasons: 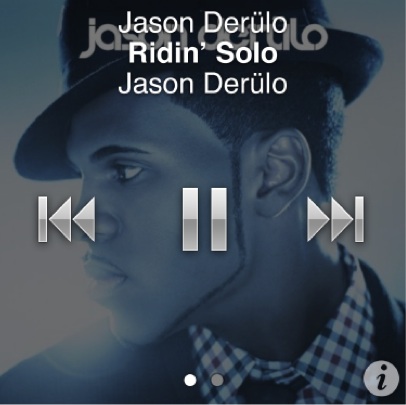 Whether this is an acceptable replacement for hardware controls will depend on how you use your iPod. If you’re constantly skipping ahead to the next song, it won’t be to your liking. If, on the other hand, you tend to listen to whatever comes up and only need to hit play/pause occasionally, it’ll probably be fine.

However it rates on the convenience/inconvenience scale, the 6th-gen nano won’t be getting clipped to my arm. Despite the extra work of keeping three iPods in sync, my troika is working just fine.