Around noon yesterday, I got a text from my wife asking if I knew why helicopters were flying around near the Fox Valley Mall. A few minutes later, my business partner called to tell me she’d just driven past a plane crash south of the mall. The plane, she said, had crashed into the health club that I ride my bike past every day.

Which answered the question about the helicopters.

You can read one of the better news stories about the crash to get the usual details about pilot and passenger—who survived and are apparently doing well—and the people in the health club at the time of the crash. They also have a decent gallery of scene photos. I’ll take a somewhat more idiosyncratic approach.

I usually have my camera with me as I ride to and from work, and I made absolutely sure it was packed in my panniers when I went home yesterday. Not unexpectedly, the scene was taped off and the general public kept away from the building, but there were still some interesting views (all photos from this Flickr set). The plane came from the south and hit the southwest corner of the building, into a hip-roofed turret above the normal roof line. This is the west side of the building, looking south, and you can just see the white, red, and black of the wing sticking out under the green roof. Here’s a better detail. Going around to the south side of the building, you can see the entrance hole and the crane that was set up to extract the plane. At this point, the pilot and passenger had long since been rescued and taken to the hospital, but the plane was still in building. In this photo, I’m lined up looking due north at the south wall. Zooming in on the hole, you can just make out the tail of the plane, back in the shadows and slightly tilted to the right. Like everyone who knows the area, when I heard the news I immediately assumed—correctly, as it turned out—the plane had come from Aero Estates, a little subdivision south of crash site that has a private airstrip. Turning 180° from the previous photos, I shot this view of the subdivision across an open field. Seems really close, doesn’t it? Here’s a detail showing the airstrip itself.

And here’s a screenshot of the Google Maps view of the area. 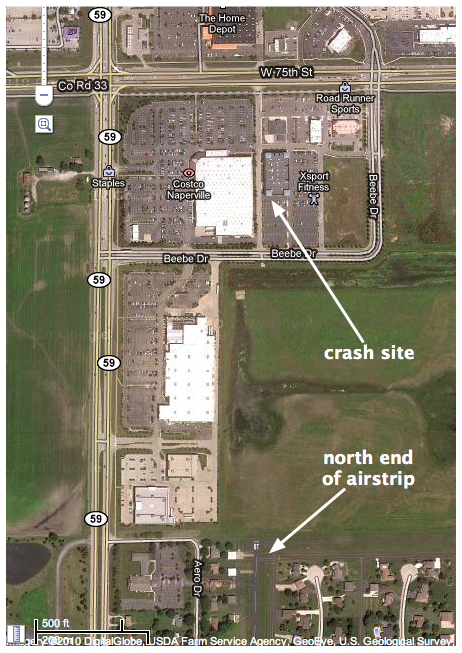 The north end of the runway is about 2000 feet from the crash site and almost perfectly aligned with it. (The bike path I ride on to and from work is the thin gray line that runs along the south side of 75th Street.)

Aero Estates has been around for as long as I can remember, well before the health club or any of the other commercial property in the area was built. Back then, it was way out in the country—a good place for light plane enthusiasts to fly their toys unimpeded. But development is closing in. The open area between it and the health club is, I believe, a protected wetland, but there’s sure to be building all the way up to the edge of the protected area.

Shortly after I left the site, I looked back as saw the crane’s boom extended up above the roof line of the building, which indicated that some work was about to commence. Having been at several demolition jobs in my life, I knew the process was going to be long and boring and had no desire to go back and watch. From the photos in the news article linked above, it looks like the plane itself wasn’t removed until the predawn hours today, so I made the right choice.

I did swing by this morning, and before being chased off the property by one of the workers,1 I got a few photos of the site and the plane.

As you can see here, they took off that whole green roof to get at the plane from above.2 As you can see, the fuselage was basically intact, which is why the pilot and passenger did so well. The nose and engine of the plane, flipped upside-down, were at the other end of the trailer, and the wings were bundled up in-between. The pilot chose a good building to crash into. I’m pretty sure most of the other buildings in the area have precast concrete or reinforced concrete block walls. In contrast, XSport Fitness is light frame construction with either stucco- or EIFS-coated panels. Much easier to break through without damaging your plane or yourself. Even the brick portions of the building are weak and forgiving: a single wythe of brick façade with no visible reinforcement.

He also chose a good spot on the building to hit—above an empty basketball court. Had he come in lower, he almost certainly would have plowed into a room with people.

If James Fallows were writing this post, he’d be looking at the crash from the pilot’s perspective; I prefer to see it from the building’s point of view. As I said, idiosyncratic.