On my ride home from work tonight, I heard something I haven’t heard in ages.

It wasn’t “Stairway to Heaven”—that pops up every so often when I’m shuffling through my iTunes library. No, what I haven’t heard in ages is the crackle of a well-played vinyl record. Here’s the end, where the pops are even more prominent.

You can actually hear the rotation of the record in the noise.

I got these clips not from my iTunes library proper, but from the Guitar Greats radio documentary that I recorded from BBC Radio 6. One of the episodes was on Jimmy Page, and of course they played “Stairway.” Why the crackle? This is a rebroadcast of a show that first aired in 1983, at the dawn of the CD era. Radio stations were still playing mostly vinyl back then, and the BBC’s copy of ZoSo had clearly been played a lot.

Although I was delighted to hear the old crackle again, I’m happy to be done with vinyl and have no romantic notions of its superiority. Whenever I hear that vinyl is making a comeback, I lament the stupidity of my fellow humans.

LPs were a pain in the ass. Apart from their weight and the space they took up, they’d only play for 20 minutes or so before you had to flip them. And to keep them sounding good, you had to constantly clean them with this stupid paraphernalia. 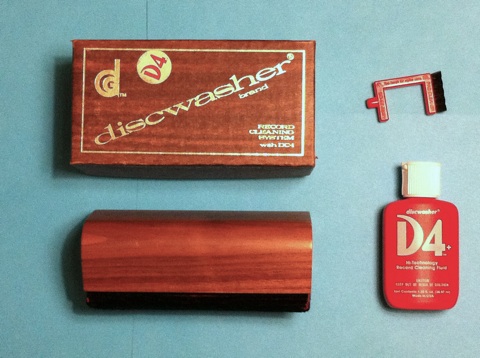 (This is not some historical photo I found on the internets. I just took it a few minutes ago. That’s my Discwasher system, which I still have—God knows why—30 years after I bought it.)

“Oh, but CDs just don’t have the warmth of vinyl!” Bullshit. The warmth on those old LPs came from singers who didn’t need to have their voices processed to fare-thee-well just to get them in the neighborhood of on-key. Putting Fergie on vinyl isn’t going to turn her into Mavis Staples (whose warmth would come through even on a 32-bit MP3).

So…anyway…what was I talking about? Oh, yeah: crackle. I smiled when I heard it today, but I wouldn’t be smiling if I had to hear it every day.