I don’t want to go all Cory Doctorow here, but a little loosening of copyright restrictions would sure come in handy now.

I’ve been listening to the audiobook of Sean Wilentz’s Bob Dylan in America for the past few days on my bike ride to work. I’m still in the early chapters, and Wilentz is exploring Dylan’s antecedents in American music through the works of Aaron Copland. It’s a perfect opportunity to have short passages of Copland playing, either under or in turn with the narration. But I guess the costs of doing so would have broken the budget. 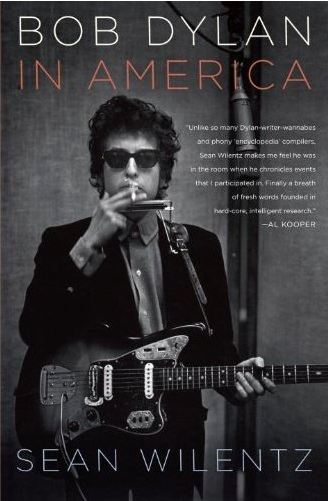 Too bad, because having the referenced music—Copland’s in the early chapters, Dylan’s and his contemporaries’ later on—intertwined with the text would have made the audiobook the definitive version of Dylan in America. Listeners would have been brought closer to what was in Wilentz’s head as he was writing.

In a way, of course, I am hearing some of the songs; my memory plays them in my head when they’re mentioned in the text. But because my knowledge of Copland is spotty, I’m probably not getting the effect Wilentz was after. The “Fanfare for the Common Man” that I hear has Keith Emerson on sythesizer. You might expect my version of “Hoedown” to also be ELP’s, but it isn’t; it’s a conventional orchestration that, unfortunately, keeps getting interrupted by Robert Mitchum telling me that beef is what’s for dinner.1

I know the Dylan catalog pretty well, so I’m hopeful that what I hear in the later chapters will be truer to Wilentz’s intent.

As I lay in bed this morning, just hours after posting the paragraphs above, I plugged my iPod into my ears to continue Dylan in America. Not a minute went by before Wilentz interrupted his narration to play a section of “Chimes of Freedom.” A few minutes after that came a bit of “Desolation Row.” I guess Doubleday got the rights from Columbia/CBS/Sony.

The “Desolation Row” clip reminded me of one of my favorite sights from the Dylan concert I went to a few weeks ago:

I will always remember fondly those two women who thought they could dance to “Desolation Row.”

If only they’d danced with their hands in their back pockets, Bette Davis style.