When I went into my office Monday morning this episode of ABC Radio National’s The Science Show was sitting in iTunes, waiting to be synced. I do like The Science Show, but during the winter, when I’m not commuting by bicycle, the time I spend listening to podcasts is shortened and many episodes get the fast forward treatment. This one, though, I listened to twice.

It’s the recording of a talk given by Naomi Oreskes, a historian of science at the University of California, San Diego, in support of her recent book with Erik Conway, Merchants of Doubt: How a Handful of Scientists Obscured the Truth on Issues from Tobacco Smoke to Global Warming.1 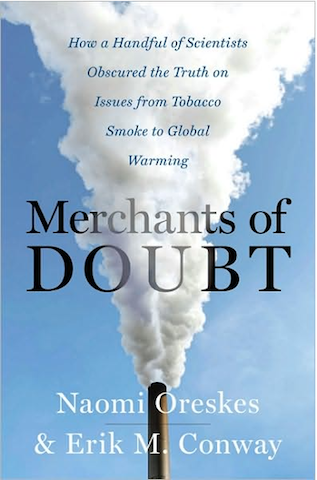 Although the book also covers acid rain, secondhand smoke, the hole in the ozone layer and DDT, Oreskes’ talk is mostly about global warming and the means by which a dedicated group of politically motivated scientists2 manufactured doubt about it.3

I listened to it a second time because it was so well done. Oreskes is not, by any conventional measure, a great speaker; her voice isn’t mellifluous, her few jokes are perfunctory and not particularly funny, and she doesn’t put on a multimedia show. Instead she uses the traditional rhetorical tools of organization and logical progression to make a devastating argument. If you have any interest in persuasive speaking or writing, you owe it to yourself to listen at least once.

A couple of days ago The Science Show added a transcript of the talk to the episode’s web page. If you’re really pressed for time, you could just read it, but listening is better because it was written as a talk, not an essay. The transcript is better thought of as a reference.

After listening the first time, I went to my library’s web site and put a hold on Merchants of Doubt. After hearing the the condensed version, I want to get the whole story.