I’ve been using MsgFiler, an Apple Mail plugin, for quite a while now. I wrote up a longish description of why and how I use it back in 2009. The short summary is

Not mentioned in that older post is that I’ve developed a habit of filing my messages in batches. I let my Inbox and Sent box go unfiled for a month (less if the mail volume has been particularly high), and then I go through and file everything, bringing myself back to Inbox Zero. MsgFiler is especially helpful with this workflow because it can move any number of messages into a single mailbox with just a couple of keystrokes.

Today, or maybe yesterday, MsgFiler 3 appeared in the Mac App store. The upgrade from Version 2.x to Version 3 marks a significant change, as MsgFiler 3 is no longer a plugin, but a standalone application that communicates with Mail through Apple Events. Plugins have a tendency to break when the base application is updated, so this switch should make MsgFiler more futureproof.

I obviously haven’t been using the new MsgFiler very long, but despite the change in architecture it seems to be working just like the old version. The only thing I don’t like about it is a default setting that labels filed messages green. 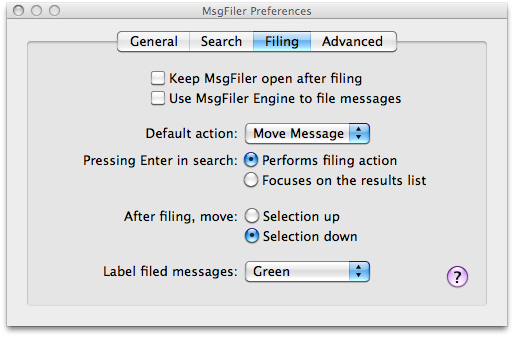 I had already filed dozens of messages before I realized they were being colored green. I had to go hunting for the preference and change it from Green to None, and now I have to go in and undo the color on the messages already filed.

This is a weird setting, as there should be no difference between a message filed via MsgFiler and one filed by dragging it into its mailbox. Anyway, a word to the wise: look through MsgFiler’s preferences and make the changes you need before you use it.

MsgFiler 3 is $5. This is an introductory price that will jump to $10 in a week. To get a better sense of how it works, you can read my old post, most of which is still valid, or watch the video on MsgFiler’s home page. If you use Mail the way I do, MsgFiler is a huge help.