My extra long post last month comparing four iPhone note-taking apps had an unexpected benefit. A few commenters pointed me to Notesy, an app that seemed to have a couple of advantages over my then-current fave, Elements. I gave it a try and it’s taken over the note-taker spot on my iPhone’s home screen.

The first version of Notesy I tried—1.4, I think—had some great features, but also one horrible bug that kept me from recommending it. I sent my concerns to the developer, David Findlay, and over the past few weeks he’s not only fixed the bug but also added some significant improvements. Version 1.6, which hit the App Store yesterday, is an excellent note-taking app.

Let’s run through the same set of categories I used in comparing Simplenote, Elements, PlainText, and Nebulous Notes.

Notesy costs $2.99, more than Nebulous, less than Elements. Like Nebulous and Elements, that’s the full price with all features; there are no in-app purchases to turn features on or advertisements off.

Notesy syncs automatically with Dropbox, and a full copy of each of your note files is on the phone, so you can edit files when offline. This is the way Elements and PlainText work. Like PlainText, Notesy can sync with any folder in your Dropbox folder, so if you’re like me and already have a folder of notes in Dropbox, you can choose that folder and be up and running in minutes. 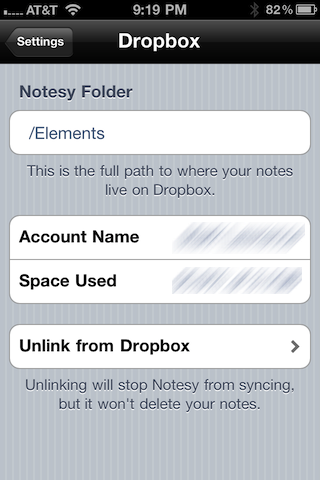 Here’s where Notesy beats Elements. Like Elements, Notesy allows a you to choose from a wide variety of proportional and monospaced fonts. But instead of forcing you to use the same font for all your notes, Notesy lets you choose one proportional font and one monospaced font. Each individual note can be assigned to one of these fonts or the other. 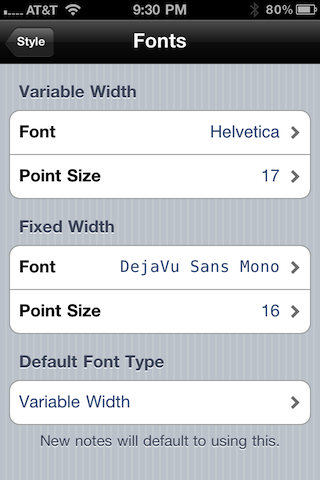 As I’ve said before, many of my notes are lists of things that really benefit from a columnar layout, and the only way to get columns to align in a plain text file is to use a monospaced font. But not everything I write on my iPhone needs that alignment, so it’s nice to work in a proportional font for everything else. 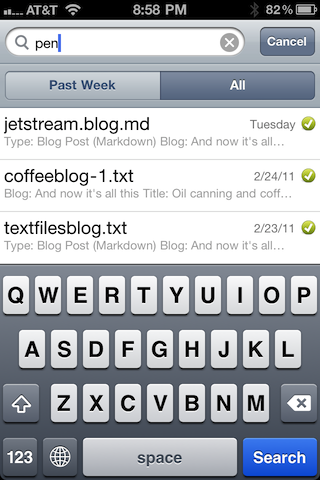 One advantage of Notesy’s search is that you can limit the search to just those files that have been modified in the past week. This can be a help when searching on a fairly common word.

Notesy can sort your notes by

I’m not sure how it manages to sort by creation date; I was under the impression that Unix file systems don’t keep track of creation date.

Notesy’s full screen mode is like Simplenote’s: easy and obvious to get into and out of.

Notesy’s on the word count bandwagon. Tap the circled i in the bottom toolbar and you’ll get a screen with all kinds of info.

The default view of a note is simple and clean and the buttons on the bottom do pretty much what you expect. 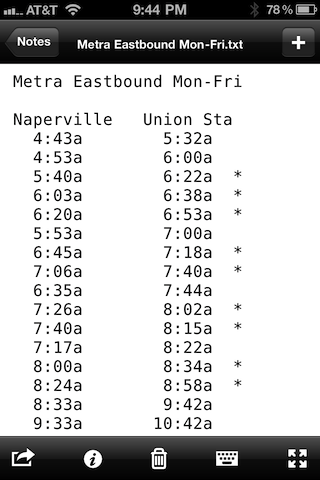 There are, however, features hidden behind the “send this” button that don’t have anything to do with sending. Here’s what you see when you tap it. 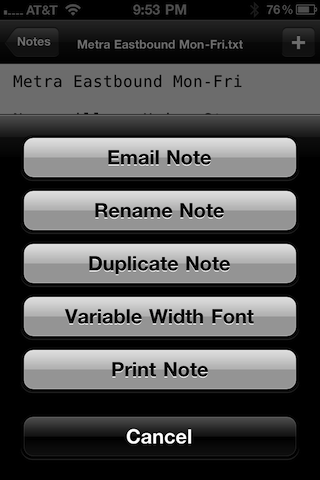 As you can see, only one of the these buttons involves sending; it would probably be a good idea to change the icon in the bottom toolbar.

To me, the most important button in this list is the one that toggles between the proportional and monospaced fonts. I’ve never tested the printing feature, so I can’t tell you how well or poorly it works. Honestly, I just don’t see myself ever printing from my iPhone.

One of Notesy’s newest features appears in the notes list. Non-text files are grayed out, indicating that Notesy can’t edit them. But if the icon next to the file name isn’t just a blank rectangle, Notesy can display it. 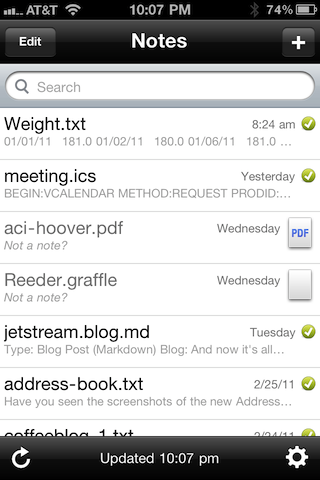 In this example, Notesy can display the PDF in the same way the Mail app can, but it can’t display the OmniGraffle file.

Notesy has a setting for making files “Windows friendly,” which basically means using CRLF line endings instead of just LF. I, of course, have this option firmly turned Off.

Unlike Elements, Notesy doesn’t add a byte order mark (BOM) to the front of the file, so I no longer have to worry about stripping it from data files I may want to plot or otherwise process.

Unlike Simplenote and PlainText, Notesy doesn’t detect “links” in files. Strings that look like phone numbers, for example, can’t be tapped to dial them.

Notesy cannot process Markdown and display the result as a web page. When Elements first added this feature, I thought it would be something I’d use a lot. Turns out I almost never did, so Notesy’s omission doesn’t bother me.

Like Elements and Nebulous Notes, Notesy offers a variety of text and background colors to choose from. I just stick with black and white.

Notesy cannot create or access subfolders, but this is a feature David Finlay is working on.

Update 3/16/11
This morning I read about a bug in Notesy, and I’ve been able to confirm it through my own testing. A zip file in the folder Notesy syncs with will cause an immediate crash of Notesy as it tries to download the file. While this is certainly not normal use of that folder, it is a foreseeable occurrence. Notesy’s ability to list—and in some cases view—non-text files suggests that you should be able to put any sort of file in your sync folder, but that’s not the case.

Until this bug is fixed, Notesy users should avoid putting any non-text files in their sync folder. You certainly don’t want to find yourself out with your iPhone, trying to look something up, and unable to open any of your files because the app crashes on launch.

This is, perhaps, also a good argument for having more than one note-taker that can access the same sync folder—they’re unlikely to have the same bugs. In this case, neither Elements nor PlainText can do anything with zip files, but neither of them crash when one is present.

As I said at the top, Notesy has taken over as my standard iPhone editor, mainly because of the ability to use both proportional and monospaced fonts as appropriate. I haven’t removed Elements from the phone yet, but it has been relegated to my fourth screen.