Well, as you might have predicted from this post, I’ve taken Calvetica off my home screen and returned the builtin Calendar to that place of honor. There are, as I said (and as many, many people have said), some very nice features in Calvetica, but those features are mainly geared toward making appointments, not viewing them. I spend much more time on my phone viewing appointments, and the builtin Calendar is more efficient at that task.

There was one other thing about Calvetica I didn’t like, although I didn’t mention it in my earlier post: the weekly view is laid out the wrong way. 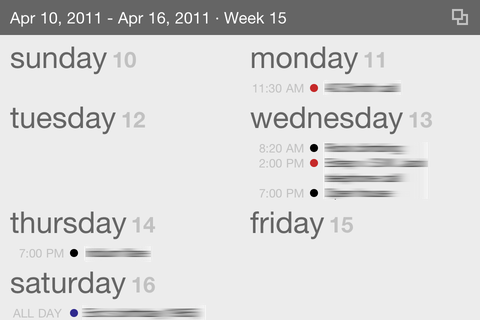 Two-column weekly calendars are laid out column-by-column—the way a newspaper or magazine is read—not row-by-row. 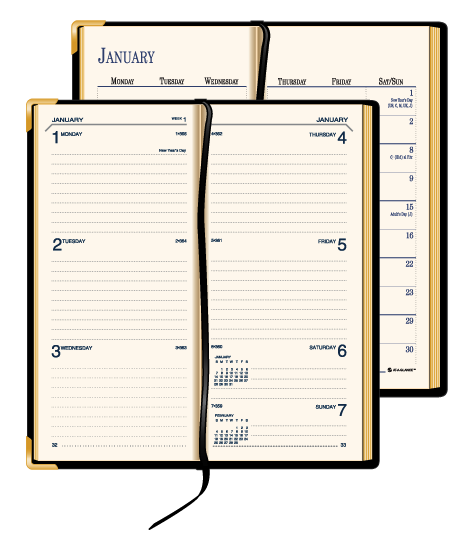 There’s nothing inherently wrong with going row-by-row, but conventions should be adhered to unless there’s a very good reason to break them. My favorite example is the brake and gas pedal layout in a car. That the brake is to the left of the gas is merely a convention, but it’s a convention a car maker would be an idiot to break.

One more thing: Weekly calendars should start on Monday, not Sunday, so you can see both days of a given weekend in a single view. Paper calendar makers have always known this. I don’t understand why electronic calendar makers—and iCal and BusyCal are just as guilty as Calvetica in this regard—can’t figure it out.

I’m not suggesting a slavish devotion to all the conventions of paper. The complaints about the upcoming design of iCal in Lion seem spot-on to me. But that doesn’t mean everything that paper calendar makers do is wrong.1 Paper calendars have been around a lot longer than electronic ones; throwing out everything their designers have learned about how people use them is just as wrong as cluttering up the screen with pictures of torn paper.