While the Google Maps scroll/zoom confusion I blogged about last week has been around for years, the printing problem I ran into today seems new. It’s a case of Google doing things right initially and then screwing it up later.

I have a packed schedule on Monday. A meeting in Joliet in the morning and one north of Wrigleyville in the early afternoon. I haven’t been to either location before, so I used Google Maps to see where both places are and how to get to and from them. That worked just fine, especially now that the scroll ball on my mouse doesn’t zoom me in and out anymore.

The problem came when I printed the directions. I like to have both the narrative directions and a map, so I always click the “Include large map” checkbox in the directions window and arrange it so I have a good view of my destination.1 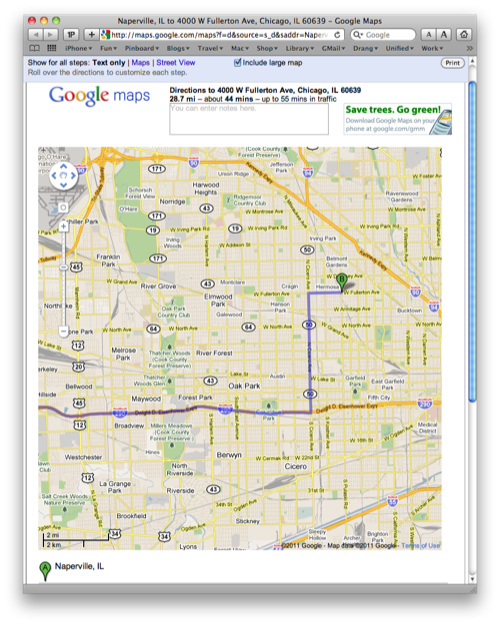 The next step is to click the Print button in the upper right corner of this window and send the map and directions off to the printer. I have a duplex printer, and in the past, when I’ve chosen the “Two-sided” option, I’ve gotten a nice big map filling one side and the narrative list of directions in large type on the other. Not today.

Here’s what the previews in the Print dialog told would be printed: 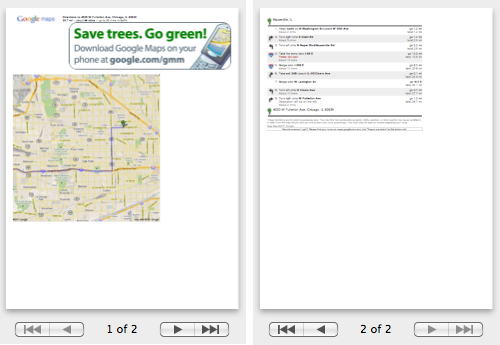 The “Save trees. Go green!” self advertisement that was tucked off to the side in the earlier view has grown to monstrous proportions and has pushed itself down and past the address. Even worse, it’s somehow thrown off the scale of the entire page, making both the map and the list of directions smaller than they ought to be.

The print preview wasn’t lying, either. That’s exactly how the pages looked when they came out of the printer. So instead of having something that’s big and easy to read at a glance while driving, I now have something that’s more whitespace than ink. Not exactly a good use of paper that Google is so worried about me saving.

(As an aside, I’d also like to register a complaint about this whole “save trees” trope. Although I’m sure there are still unmanaged forests that are being logged for pulpwood, most pulpwood trees are farmed, just like corn, wheat, cotton rice, etc. I’m not in favor of wasting paper, but imploring me to use a phone app in order to save trees makes about as much sense as telling me to wear polyester to save cotton. Google would have me reduce the life of my phone and battery, which are filled with rare metals and toxic chemicals, so I can cut back on the use of an easily renewable and recyclable resource.)

(And as another aside, does Google really want to encourage people to be scrolling around on their phones while driving? Trying to read a map and directions on a phone—which require switching views and scrolling—is far more distracting than reading them on paper. Or at least it would be if the printed directions and map were the size they were before Google stuck its stupid “Save trees” message into the page and ruined the formatting.)

It was only a couple of weeks ago that I last printed a set of directions from Google Maps, and that set came out fine. Somehow Google decided to put this pseudo-green exhortation in the print view only but didn’t check to see that it ruined the result.

Update 6/4/11
Well, it didn’t take long for someone to set me straight. Bradley Petrik (@bradleyjp) tweeted a workaround within about 20 minutes:

The comment box is just above the map in the top screenshot—the box that says “You can enter notes here.” Just type something in there—even just a space or two—and the “Save trees” thing disappears and the map and directions enlarge to the full width of the page. In some ways, this is a weirder bug than the original one, but since it works in my favor, I’m happy to see it.