I was busy at work at the beginning of the month, when I normally do this post, and when I came up for air I forgot to go back and fill in. I was going to just wait until the start of next month, but then I realized there was an important anniversary this month, so it seemed best to time the post with that. 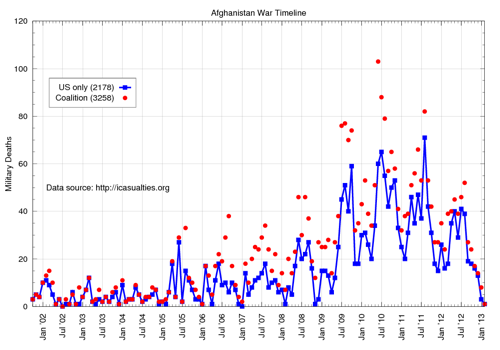 February was an even better month than January, with only one coalition military death. Unfortunately, the count for March is already up to 12 as I write this, so the streak of single digits will end at two.

Today marks the tenth anniversary of the US invasion of Iraq. I started this series of posts several years ago to mark the cost in US and coalition lives of that horrible mistake.1 I began to include Afghanistan (and all of Operation Enduring Freedom) when it became clear that we were going to compound the Iraq mistake by trying for a do-over in the country and the war we abandoned in 2003.

I’m not sure why something that seemed obvious to me—that even though leaving Afghanistan for Iraq was an error, that error couldn’t be corrected by re-escalating (how easy it is to revert to a Vietnam-era vocabulary) in Afghanistan six years later—wasn’t obvious to Barack Obama, his advisors, and the Pentagon. But it wasn’t, and the original mistake of Iraq has mutated into our current situation.

James Fallows at the Atlantic has been running an excellent series of posts on the invasion of Iraq, and the lessons we as a country have managed not to learn from it. He, following the arguments of Andrew Bacevich, lays much of the blame on Paul Wolfowitz, who put an intellectual veneer over a collection of lies and wishful thinking. I understand this point of view, but I don’t agree with it. I think most of the blame should go to Colin Powell.

It was Powell who had the trust of the American people; Powell whose doctrine said that America shouldn’t get into wars unless our vital national interests were at stake; Powell who as Secretary of State could have argued forcefully against a war that didn’t meet the criteria he himself had laid out; and, finally, Powell who went before the United Nations and traded on his reputation to put forward a deceitful case for the invasion. I watched his presentation with an open mind, but when I heard him bring out the already-discredited aluminum tubes “proof” of Iraqi nuclear weapons, my mind closed shut. If you have the goods, you don’t need to lie.

Powell’s reputation was damaged by this disgraceful performance, but not as much as it should have been. He could have gone down in history as a latter day George Marshall, but he threw that away to carry water for lesser men like Cheney and Bush. I don’t believe that his opposition could have stopped the war—there was too much desire for it as our fears and anger over September 11th were corrupted and twisted—but he didn’t even try. And he let his country down in the process.