Because of the link from John Gruber to last week’s post on Touch ID, I’ve gotten a lot of advice on improving its accuracy. I haven’t made any changes to my phone, mainly because I’d retrained it just a couple of days before writing the post, and I wanted to see if my new setup would decay like the previous ones had. Turns out™, though, that a couple of the tricks I tried in my last retraining were exactly what people suggested.

First, I spent a lot more time training Touch ID on the edges of my fingers and thumbs. This was mentioned by several people, including John Moltz. I blame Apple for the fact that I didn’t try this in either of my two previous training sessions. The fingerprint graphic that fills in as you teach the sensor1 makes it look like you should work across the entire finger pad, even the parts that’ll never touch the sensor. Also, as Apple walks you through the fingerprint training, the latter portion of the session focuses on the edges of your finger. You’d think that’d be good enough and that Apple wouldn’t let you get away with a substandard session. But my earlier experience was so poor I figured it was worth a shot trying to do all the training out on the edges.

Second, I made sure my fingers and (especially) thumbs were more sideways than before, matching their orientation when I unlock the phone. Underscore David Smith has done the same thing:

Interestingly registering my right thumb both normally & sideways like this has really helped reduce my failure rate. 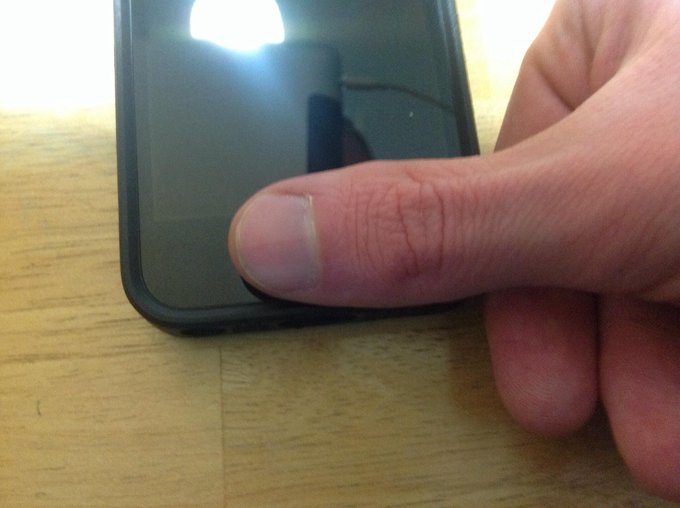 Apple explicitly says there’s no need to do this because it handles the orientation. Still… couldn’t hurt, could it?

(One thing I didn’t try that many people suggested was putting the same finger into more than one “slot”—using, for example, your left thumb for both Finger 1 and Finger 2. Seems like a good idea, although I’ve also read that the more slots used the longer the recognition takes.)

So far, I’ve had over a week of excellent unlocking with no discernible decay, but I won’t declare victory until I get a least a month of good behavior. I’ll update again in the New Year.