Apart from the usual plot, 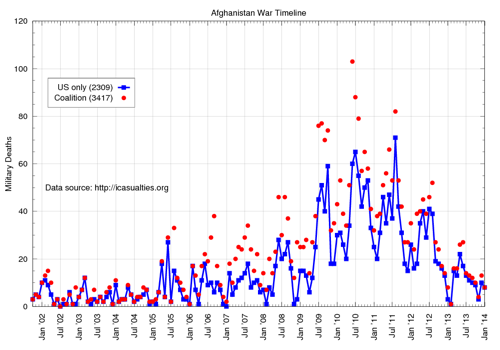 I want to link to a couple of stories.

First, via Kevin Drum, there’s this report from Pew Research, which tracks the changes in US attitudes toward the wars in Afghanistan and Iraq. I was struck by the same thing Kevin was: that only 35–40% of Americans now believe the war in Iraq was a success and that there’s virtually no difference between Republicans, Democrats, and Independents in this belief. I’d feel better about this if I thought it would have any bearing on attitudes for the next war.

Then there’s this post by James Fallows (with two followups) about Cory Remsburg, the young soldier who sat in the gallery and whose story was told during the State of the Union address. It’s a reflection on how we use our “support” of the troops to shield ourselves from the hard questions of what we’re doing to them and why; as if parading them around at football games and political functions absolves us of the blame for sending them off to fight a war we don’t even approve of.