This post was inspired first by Marco Arment and his son, Adam:

The post was further inspired by Daniel Jalkut, who, like all smart people, isn’t afraid to confess his ignorance on topics outside his comfort zone:

What I know about construction equipment comes from growing up with a father who was a design engineer at Caterpillar for 30 years and from my own 20+ years investigating equipment failures. This, far more than the little amateur programming projects I usually write about here, is my comfort zone. So I decided to break out of my usual blogging habits and actually write about something I know.

This is also an exercise in nostalgia. The photo of Adam reminded me of my older son, Joe, who was thoroughly obsessed with construction equipment when he was that age. Nowadays, as a tall, deep-voiced high school senior, he wouldn’t know the difference between a loader and a backhoe, but when he was 3–4 years old, he was an absolute expert. The only thing he liked more that flipping through books with pictures of Big Muskie and the Silver Spade, was going with me to local construction sites and seeing machines at work.

The equipment names I’ll be giving here are what manufacturers use. Construction workers have any number of names for these machines—a small percentage of which don’t even involve profanity—and I’ll include as many of these nonstandard names as I can think of. 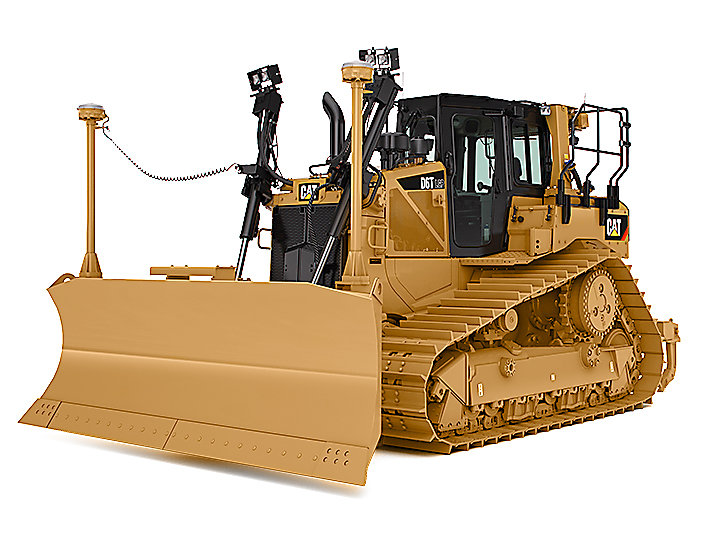 Dozers are the ur-machine of earthmoving, and the segmented steel tracks they run on are what gave Caterpillar its name.1 Each individual segment is called a shoe, and the spines that stick out of the shoe and dig into the soil for traction are called grousers. The tracks are meant to handle rough terrain while also spreading the load of the machine over a large area of ground contact.

The single wide blade at the front is for grubbing, pushing, and smoothing. Hydraulic cylinders behind the blade adjust its elevation, tilt, and horizontal angle. Dozers are often fitted with a ripper tooth on the back for loosening hard soil and are also used to pull other equipment around on a job site. 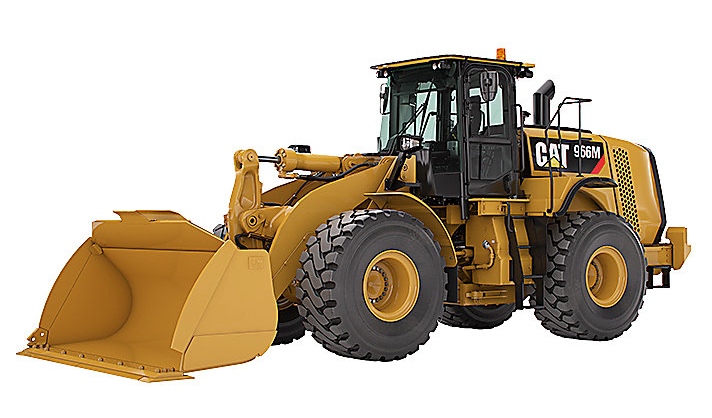 Loaders have a wide bucket on the front that can be used for shallow digging but is usually used to scoop up loose material and load it2 into trucks. The position of the bucket has led to these often being called front-end loaders, but the front-end part is redundant. I’ve never seen one with a bucket at the back end.3

Some loaders run on tracks instead of wheels. As you might guess, they’re called track loaders. When Joe was at the peak of his machinery love, he was with me once at a store, looking out the front window at some construction work going on across the street. Another little guy, about a year older, was watching too, and said he liked the bulldozer. “That’s not a bulldozer,” said Joe. “That’s a track loader.” I was never prouder.

Update 8/13/14
Reader Jonas Nilsson sent me a link to this image of a Volvo tractor with a loader attachment at its back end. According to Jonas, the name of this equipment in Swedish translates to back loader or back-end loader. You’ll note that in the linked photo the attachment is equipped with forks, not a bucket, but the mechanism could certainly accomodate a bucket. 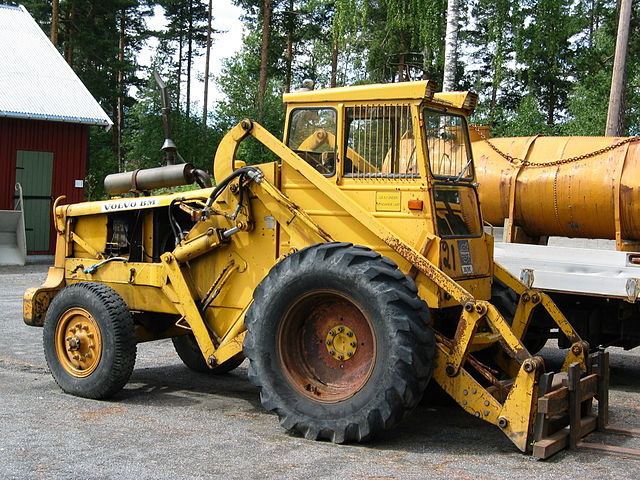 Jonas says these back loaders used to be popular in northern Europe because they were cheap, but their disadvantages eventually outweighed the cost savings and they’re fairly rare now. I’ve seen plenty of farm tractors in the US with loader attachments on the front, but never anything like this. Thanks, Jonas! 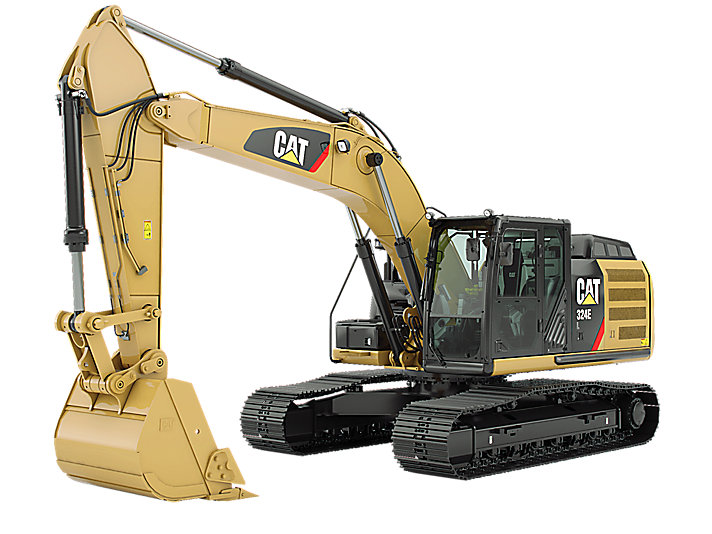 Excavators are for serious digging. They have a long, deep reach, and can switch buckets quickly for different types of digging operations. You’ll often see them outfitted with slings and cables to pick up pipe sections and lower them down into the trenches they just dug.

Many people refer to excavators as backhoes, but this isn’t quite right because the bucket is on the front of the machine, not the back. I’ve also heard them called trackhoes, which makes sense because they’re hoes on tracks,4 but very few people use that name and no manufacturer does.

By the way, there are two fundamentally different types of digging machines, and they get their names from the hand implements they mimic. Shovels dig by scooping down and away, hoes dig by drawing down and back. Hoes are more common, but you probably remember a famous shovel. 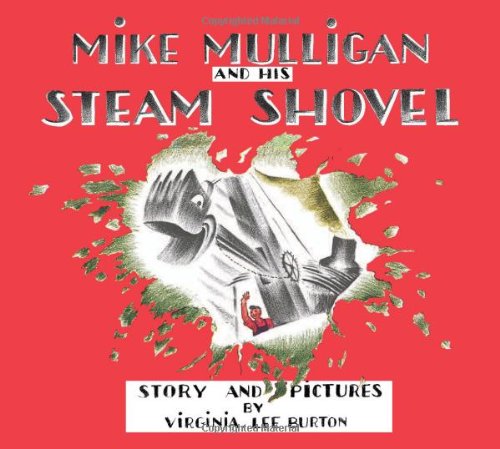 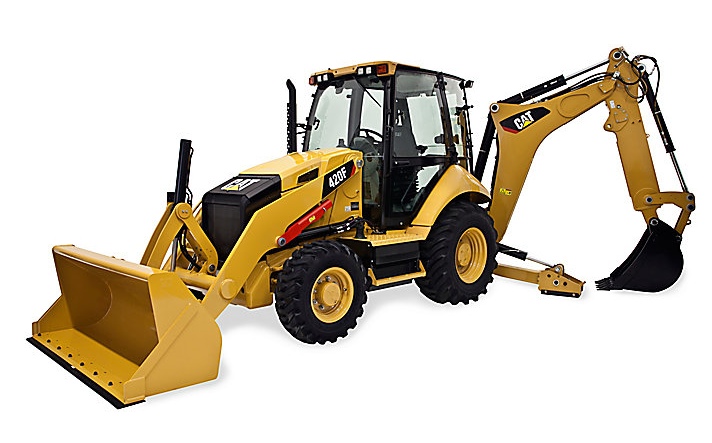 The backhoe loader (often called the loader backhoe) is a hybrid machine with a loader bucket on the front and an excavator attachment on the back. For this machine, the word backhoe makes sense because the hoe is on the back. The operator, who normally faces forward toward the loader bucket, swings the seat around when it’s time to use the backhoe. The legs off the rear are called outriggers, and they’re brought down to stabilize the machine when digging with the backhoe.

On some machines, the backhoe is truly a separate attachment to a tractor. On this type of equipment, the backhoe has its own little seat. 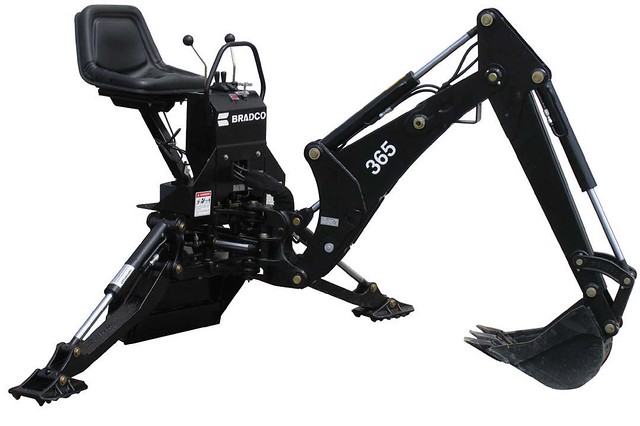 Scrapers are like dozers in that they have a blade that can cut through soil and level the ground. But a scraper doesn’t look anything like a dozer because its blade is at the bottom of a bowl—that’s the low part at the rear—which fills with the soil the blade cuts. A scraper can also be used “in reverse,” dumping soil out of the bowl and leveling it as it’s driven around the site.

I once had a project in Virginia in which the client kept referring to pans being used on his jobsite. It took me a while to realize he was talking about scrapers, substituting pan for bowl and then using that word for the entire machine. Even my dad hadn’t heard that one before. 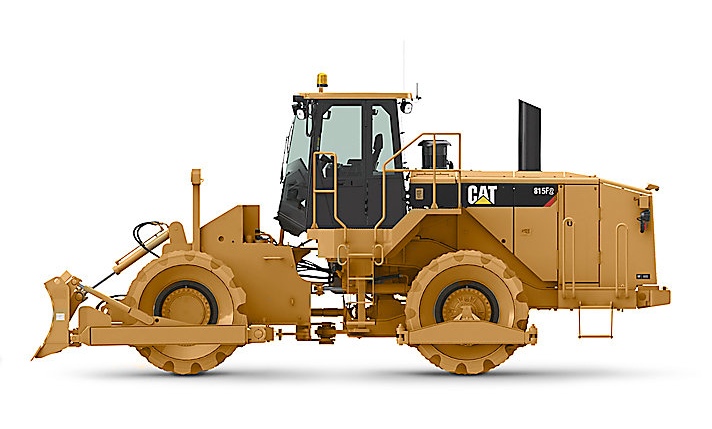 Soil compactors are often equipped with dozer blades to push soil around, but their shaped steel wheels are intended to do almost the exact opposite of a dozer’s tracks. The wheels focus the weight of the compactor onto a very small area to make the underlying soil more dense. The denser the soil, the better it is as a base for a roadway, parking lot, or floor slab.

Because this is a blog post, and not a Dorling Kindersley book, I’m going to stop here, even though I haven’t even finished with earthmoving equipment. This makes for a good start, though, and should allow you to identify most of the machinery you see despoiling that nice wooded area to put in a strip mall.